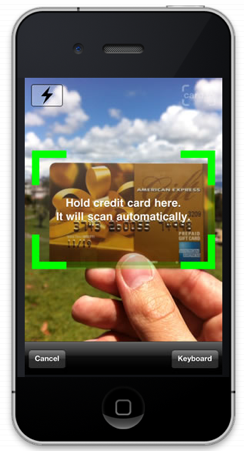 When it comes to mobile applications that involve commerce, one of the biggest obstacles is getting users to actually pay for an item. Indeed, the user might be perfectly willing to hand over some money, but the process of actually entering their name and credit card number on a small screen is tedious.

Card.io is a new startup making its public debut today that’s looking to make lives easier for developers and users alike — by making inputting your credit card information as easy as holding your card in front of your phone’s camera for a few seconds. You can see the feature in action in the video below — the app recognizes the card, uses server-side OCR to scan it, then gives back the results in a couple of sconds. Better yet, it’s releasing the technology as an SDK to mobile developers, so that they can bake it into their own application.

The technology is not unique — some other applications like AisleBuyer include a similar feature. But cofounder Mike Mettler says that Card.io is the only service that’s offering the functionality to outside developers as an SDK (he notes that this model worked very well for RedLaser, the barcode scanning app that has been integrated into many other mobile applications).

For now the company is still in private beta, and you can request an invite from their site. It’s iOS only for now, with Android support on the way. At this point Card.io isn’t handling any of the actual payment processing (they say all of their existing customers already have merchant accounts) but in the future they will handle this end of the transaction as well. Card.io hasn’t announced pricing, but will be charging on a per-scan basis initially, with plans to take a small percentage of each transaction once it handles payment processing.

One important thing to note for iOS apps: while Apple mandates that all transactions for virtual goods be done through in-app payments using credit cards users already have on file, real-world goods can still use alternative payment flows that can include Card.io.