Vuclip a mobile video search engine that has quietly been growing in usage, especially outside of the U.S. Of course, Vuclip isn’t as large as YouTube in terms of views. For basis of comparison, YouTube mobile gets over 100 million views a day and VuClip is 330 million views per month. But Vuclip has an active user base outside the U.S., especially in international markets including India, Malaysia, and Indonesia. The company also has a number of distribution partners include Airtel, Maxis, Tata DoCoMo, Telkomsel, Vodafone, and XL.

Today, Vuclip is releasing a report that shows which devices are consuming the most mobile video worldwide, as well as what videos are most popular in specific countries. In May, the most-viewed video in the UK was a Royal Wedding spoof ad from T-Mobile (unsurprising, considering the Royal Wedding events).

In Singapore, a Thai commercial from dtac ‘Disconnect to Connect’ rang true with mobile watchers. The Corning commercial detailing the wonders of glass. ‘A Day Made of Glass’ topped the charts in Venezuela, Indonesia and Malaysia in the last few months.

In the Philippines a video comping the Top 10 Martial Arts Movies took the top spot, and the same video also was the most viewed in Brazil. In India, The Hot Hot Los Angeles Christmas Special was the top viewed video on Vuclip.

On Vuclip’s network outside the U.S., India, Saudi Arabia, and Brazil are seeing the fastest rate of growth of video views on mobile devices.

With respect to devices, outside of the USA, BlackBerry drove the highest level of mobile video views on Vuclip in May, followed by the iPhone. In fact, BlackBerry devices held four of the top five spots for global mobile video consumption worldwide.

As I mentioned above, Vuclip’s reach isn’t nearly as vast as YouTube mobile. But it is interesting to see what platforms and videos are gaining traction in mobile video outside of the U.S. 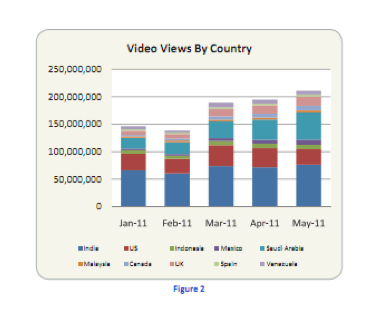