A French software company with U.S. headquarters in Chicago, Enablon, has raised a series A round of $15 million from the Environmental Technology Fund (ETF) in the U.K. Enablon’s enterprise software helps companies understand how much water, energy, chemicals and other resources they use, and how much they waste or pollute so that ultimately they can defray costs— financial and otherwise— associated with their environmental footprint.

According to a CDP report earlier this month:

“[Of 42 of the world’s major cities] 93 percent recognize significant physical risk from climate change and 79 percent of cities believe that the physical impacts of climate change could directly or indirectly threaten the ability of local businesses to operate successfully.

Cities are feeling the immediate impact of climate change, with 43 percent identifying that they are already dealing with the effects of climate change in their areas…[including] temperature changes resulting in more hot days, increased frequency of heat waves, more intense rainfall, increased severity of storms and floods and rising sea levels…62 percent of [these] cities are establishing climate change action plans and 57 percent are adopting greenhouse gas reduction targets, today.”

The trend among city governments should compel companies that seek to do business there to report more about their emissions, which is good news for Enablon in terms of increases in demand. The company faces fierce competition, however, as the field grows ever more crowded with energy-management and carbon focused software providers like: Hara, ENXSuite and Silver Spring Networks in North America. 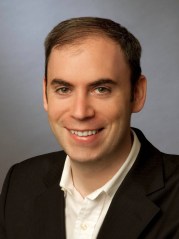 Chief executive and co-founder of Enablon, Phil Tesler, explained in a phone interview:

“Our typical customers have been global 2,000 or multi-billion dollar businesses with offices in multiple locations. Reporting has become increasingly important to them, internally and externally.

Depending on the breadth and depth of reporting a company wants to do, Enablon software and systems can be installed and running within as little as two weeks, or an install may take as long as 9 months.

We will use the series A funding to work on some cloud computing initiatives, and to internationalize. We have experienced very strong growth in Europe and the U.S. and now we need to replicate this in Asia.”