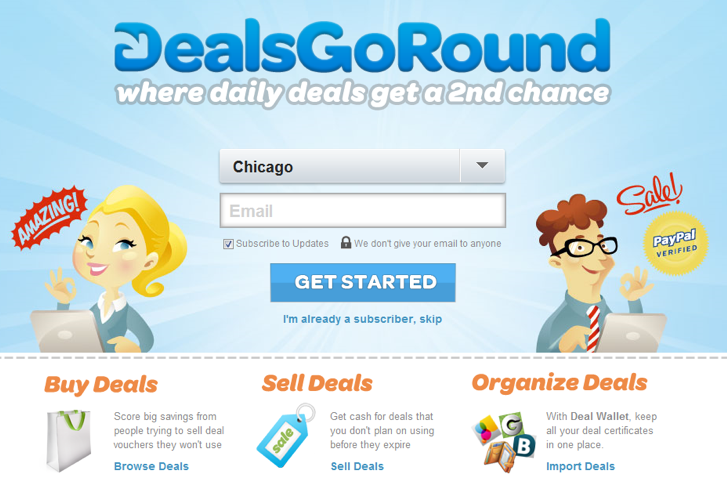 The three people following my posts might be aware that yesterday I wrote about an awesome startup called CityPockets that offers users a wallet for all their daily deals — as well as a secondary marketplace to resell deals they won’t use. Well, today DealsGoRound, one of the first secondary daily deals markets, announced that it’s not to be outdone. The startup, which was founded in March 2010, is launching its own free service today called Deal Wallet — a virtual wallet that allows users to import, safely store and manage their daily deal purchases across deal providers.

Having operated and managed one of the first secondary marketplaces for daily deals, DealsGoRound is coming at the deal resource paradigm from the opposite direction compared to CityPockets. Both startups offer similar products, usability, and features. One leg up for DealsGoRound and Deal Wallet, however, is that they can be accessed via mobile apps on the iPhone and Android.

DealsGoRound also enables users to receive weekly email alerts about their deal inventory, which include expiration dates for each deal, so that users don’t let those deals slip by without notice. If, on the other hand, you find your deal inventory brimming with deals you’re not likely to use, with one click of the mouse, users can list the deal for resale in DealGoRound’s secondary marketplace.

Like CityPockets, DealsGoRound will deposit the money into the PayPal account you’ve added after you sell your spare deals, and you’ll receive an email confirming the transaction. DealsGoRound, too, takes a small cut of each resale.

But, for both startups, the challenge lies in monetization. Compared to Groupon or LivingSocial, which have higher margins, often making close to 50 percent of the purchase price, DealsGoRound’s margins, for example, are closer to 10 percent. (Though back in March, DealsGoRound did raise $600K in seed funding from various Chicago angels.)

That being said, the fact of the matter is, that 10 to 20 percent of the vouchers purchased across the some 450 daily deals sites in the U.S. go unredeemed because people don’t get around to using them. According to Founder and CEO Kris Petersen, who was formerly an entrepreneur in residence at Lightbank (the Chicago-based fund started by a set of entrepreneurs including several of the Groupon founders), the big daily deal sites like LivingSocial and Groupon are starting to come around to the idea of secondary markets.

And, when I asked him if he thought startups like his might eventually see competition from Groupon, were they to add a secondary market, the CEO said that this kind of functionality just doesn’t seem to be on their roadmap yet. The only way deal wallets and secondary deal markets can be trusted is if they’re acting as independent businesses. While Groupon might add a wallet for its own deals, the problem of fragmentation in the market remains, and consumers just don’t want to visit 30 different sites to keep track of all their daily deals.

Startups like DealsGoRound and CityPockets are providing an already-saturated market with important additional services. Secondary marketplaces for deal resale are an important solution to the “breakage problem” cited by many local vendors as reasons for not jumping into the daily deal deluge — as well as the problem of fragmentation. Both services are easy-to-use and address serious pain points in the market, and as the many lucrative Groupon clones have proven, there’s plenty of room left in this space for competition. CoupRecoup and Lifesta would no doubt agree. And we’re all about choice here at TechCrunch.

So let us know what you think.