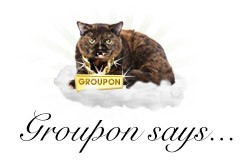 If you’ve been following TechCrunch and the tech press at large in the weeks since Groupon filed its S-1, you’ve probably come across quite a few articles criticizing the company. Groupon may, according to various posts, violate consumer protection laws, implode, get pwned in China, and lead to bouts of temporary insanity over the coming months. Booo!

You may have also noticed that Groupon hasn’t done a whole lot to denounce any of these claims (they still haven’t gotten back to me on whether the service causes numbness in the toes). And for good reason: the company is currently in a ‘Quiet Period’ mandated by the SEC, during which there are restrictions on what it can say in public statements. But that doesn’t mean they can’t fight back, just a little.

Today in a post on its official blog, Groupon’s spokescat (appropriately named Groupon the Cat) has penned a witty rebuttal outlining the “hazing ritiuals” companies must go through en route to their IPOs. Some of the main points:

It’s certainly a funny post, and it’s perfectly in line with the company’s other tongue-in-cheek statements (who can forget their announcement that “Group Raises, Like, A Billion Dollars” earlier this year?)
But other tech companies that have recently gone through the IPO process, like LinkedIn and Pandora, haven’t been facing the same degree of negative press. Granted, they’ve both gotten plenty of critical coverage (the WSJ said that investors should ‘Pass on Pandora’s Radio Flier’), but the flames weren’t nearly as intense or long-lasting as what Groupon’s faced. All of which goes to say, maybe Groupon’s getting picked on because it’s an easy thing to do, or maybe there’s something to the criticism.