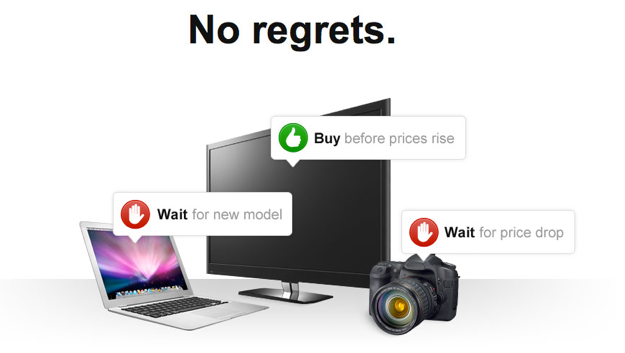 Decide.com has been cloaked in stealth mode for nearly the last two years. During that time, the startup has remained tight-lipped about what it’s been up to, while at the same time managing to raise $8.5 million from Maveron, Madrona Venture Group, Google founding board member Ram Shriram, former Expedia CEO Erik Blachford, and others — all in the name of building a “revolutionary new shopping service that will bring unprecedented levels of transparency to electronics shopping”.

Today, Decide is finally ready to unveil what it’s been working on and launch that new shopping service into the wild. The proposed goal? To offer a novel comparison-shopping tool that will take that feeling of nagging regret out of consumer electronics purchases. For those who may not be familiar with the regret associated with the consumer electronics shopping experience, Best Buy actually released a great commercial a few months back that highlights the often annoyingly speedy pace at which new product iterations and updates hit the market. Figuratively speaking, it always seems that just as soon as one buys a 3D TV, a 4D TV is right around the corner.

Decide tackles this problem by giving users a service that uses data mining techniques to tell a consumer whether they should buy a device now or wait until there’s a cheaper model on the market. After all, in doing its year-and-a-half due diligence, Decide observed that, in 2010, an average of six new laptops were released into the market each day, plus one new TV and one new camera every other day.

And, as electronics geeks know, many device manufacturers make announcements or start planting rumors about their next generation devices months before they are available on the market. MacRumors is one popular example of the many websites and blogs that traffic in these tips and early rumblings.

Thus, Decide is offering consumers a tool that uses proprietary data and predictive algorithms to tell them when they can buy with confidence, or whether they should wait for a price drop or a new model that’s slated to be released in just a few days. Decide matches hundreds of thousands of devices to their “model lineages” and crawls the Web for news and rumors, as well as applying “advanced machine learning and text mining algorithms” to predict future product releases. 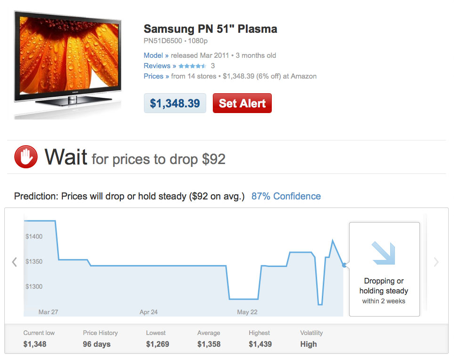 Rather than rely on trade-in credits or buyback programs, Decide wants to give consumers the ability to make the right choice the first time. It does this by using price prediction algorithms that take into account billions of observed price movements and over 40 distinct factors to offer comprehensive predictions.

Considering that Decide was founded by Oren Etzioni, the former founder of Farecast, an airfare predictions service, Metacrawler, a metasearch engine, and Netbot, one of the Web’s first comparison-shopping services, and has added several founding developers from PriceYeti (which allows anyone to track any item on the web and get an email instantly when the price drops) and Eggsprout (which compiled data on resumes) — it’s probably fair to say that Decide is a high-level, suped-up Farecast for products.

While Decide intends to eventually become consumers’ go-to resource for all things consumer electronics, the service is currently only available for TV, laptop, and camera shoppers. More to electronics will be added later this year.

So how does it work? Users simply go to Decide.com and search for, say, a TV that he or she wants to buy. Decide then comes back with a recommendation on whether to buy or wait based on its proprietary predictions about future prices and model releases.

Then, if the user wants to buy, they simply click through to the seller of their choice — Decide offers pricing on hundreds of thousands of products, too, so it’s a fairly wide selection. If, based on Decide’s suggestion, a user chooses to wait, they can view a timeline that shows when the product will be coming down in price and estimates how much that change will be. The user can set an alert to ping them when the product comes down in price, which is added to their “Watch List”, a la eBay.

Decide will also alert you if you’re unwittingly looking at an older iteration of a product you want, and at at the bottom of each product description, it presents a timeline of releases so that users can view when prior iterations were released and when it predicts new models to arrive. It also gives the user a “confidence score”, so they’ll know just how likely a new product is to be release in 2 weeks, for example.

The startup’s service provides much needed amplification to the typical comparison-shopping experience — and the many comparison shopping sites out there on the Web. Using complex algorithms plus the aggregation of data like CE and OEM press releases and sites trafficking in rumors and tips is a great concept, with a little dash of eBay’s user experience may prove to be a successful hybrid model. Of course, it’s all a matter of how accurate Decide’s secret sauce proves to be in predicting the best time to buy. But, with a year-and-a-half of data mining under its belt and a veteran team of data and search experts, I’m expecting good things from Decide.com.

Let us know what you think. 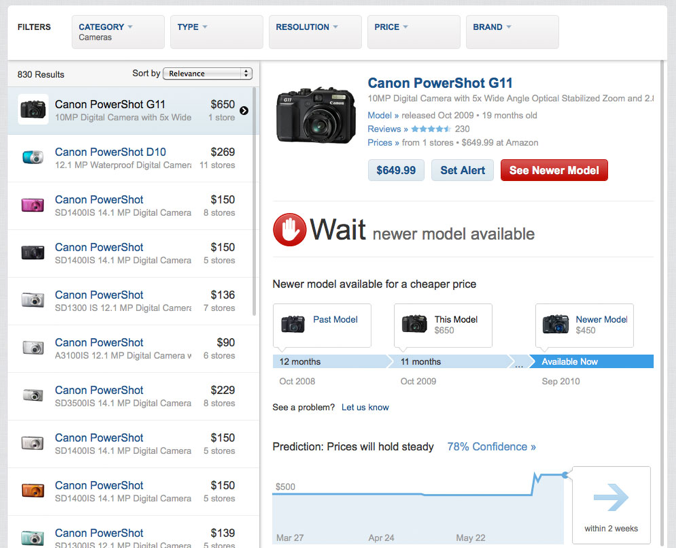