New York City-based dining deals site VillageVines is now Savored. In addition to the name change, it launched a redesigned site, is doubling its cities to ten, and added Buddy Media CEO Michael Lazerow as an investor and board member. The company raised $3 million last January.

Savored focuses on high-end dining discounts at top-rated Zagat restaurants. But the model is slightly different than your run-of-the-mill daily deals site. Members pay $10 per reservation, and get a flat 30 percent off food and drinks. Unlike Groupon or LivingSocial, merchants get to keep everything after the discount instead of splitting that with Savored. Savored makes money by charging $10 per reservation (so the deals are only appealing at restaurants where it is worth paying $10 to get 30 percent off).

Another difference with the bigger daily deal sites is that Savored is a lot more flexible. “We don’t have sky diving, we don’t have spas and salons,” notes co-founder Daniel Leahy. Restaurants can pick the times that their deals are available, as well as limit the size of the party that can take advantage of the deal. Savored makes it easier for them to drive traffic during slow hours. Members make reservations on the site just like they would with OpenTable (pick a time, restaurant, and how many diners) and 30 percent is automatically taken off the bill.

In addition to New York City, San Francisco, Chicago,LA< and Washington, D.C., Savored is expanding to Boston, Philadelphia, Atlanta, Miami, and Denver. Leahy expects that Savored will be able to drive $25 million in incremental revenues to restaurants this year. 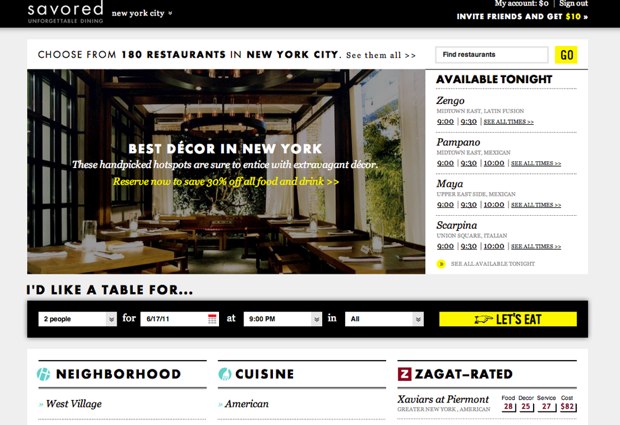