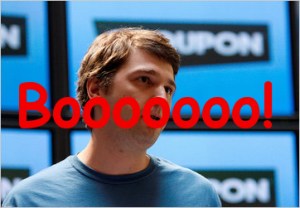 At TechCrunch, there’s nothing we hate more than predictability.

That’s the reason we sold ourselves to Aol, a company we previously considered to be a dead-in-the-water startup killer. It’s why we put Lumier on stage at Disrupt, even though their founder had nothing to pitch  and a clear contempt for the conference and its attendees. And now it’s why, after months of (almost) entirely fawning coverage of Chicago-based coupon startup, Groupon, we’ve decided to pull a dramatic 180.

Specifically we’ve decided to commission guest writer Rocky Agrawal to write an “in-depth TechCrunch series” revealing everything that’s wrong with the company, its business model, its founders, their children, pets and fashion choices. Jesus Christ, we suddenly hate those guys, and their stupid kids, dogs and shoes.

The series is currently four parts long, with each installment taking the same basic plot but adding a new twist – disgruntled employees, hypothetical law breaking – to keep readers hooked. In fact, given the name of the author and the number of episodes, one might draw amusing parallels with the Rocky series of movies. But, while the Rocky movies were ridiculous, comically aggressive crowd-pleasers which tried desperately to spread an already paper-thin plot over way too many installments, Agrawal’s posts are journalism. As such they must continue until the world is rid of the menace of daily deals (or Agrawal has 5,000 Twitter followers, whichever comes sooner).

Here, then, is a preview of the shocking revelations still to come in parts five through 8,000 of the series…

Have more dirt on Groupon? Were you dumb enough not to do any research before risking the long term stability of your business for a quick cash-flow bump? Did Andrew Mason crush your hopes/dreams/kitten? Let us know right now: tips@beta.techcrunch.com

(Next week on TechCrunch: How listening to Pandora is the worst decision a small business owner can make.)