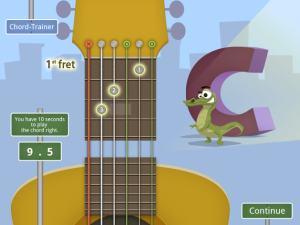 Learning to play an instrument is challenging; the progress in the early stages is slow, and the exercises that help you learn are boring and tedious. It’s largely for this reason that so many people give up on their chosen instrument before they reach vaunted rock star status. So, to combat this drop-out problem, Ovelin, an early-stage startup from Finland has built a game for the iPad called WildChords that aims to provide a fun way for beginners to learn guitar so that they can get over those early humps and go on to musical glory.

Essentially, WildChords takes the Guitar Hero model and applies it to early-stage musical education. You simply download the game onto your iPad, and pick up your acoustic or electric guitar and start playing. The app uses high-tech audio technology to recognize the sound through your device’s microphone what chords you’re playing, turning your six-string into a game controller.

The gameplay itself is based on the Pied Piper of Hamelin story, so the user finds his or herself among a menagerie of animals that have recently escaped from the zoo. Each animal likes a particular chord, so the object is to play all of the chords correctly, and save the animals — and the city — from madness.

The game levels are short one-minute exercises that become successively more difficult as the players’ skills improve. While the game is intended for people of all ages, the animation and gameplay will likely be more appealing to a younger audience.

Ovelin founders Mikko Kaipainen and Christoph Thür told TechCrunch that the game’s design is intended to differentiate itself from Guitar Hero, in that this is an app to teach the user to play guitar, not to necessarily to give you the impression that you’re a rockstar. Because, let’s be honest, most people are far from it. (Myself included.) The songs are also, generally speaking, simple, and though some of the melodies may sound familiar, you won’t find a lot of recognizable songs. This is because, as anyone who has tried to learn an instrument knows, the first thing you do is try to learn your favorite songs — whatever they may be.

But, early on, this can be counterproductive and frustrating. While you may be able to finger the chords, what you play obviously never quite sounds like what you’re hearing. Instead, WildChords’s game levels are intended to be akin to brief — and enjoyable — homework assignments.

The Ovelin founders said that the motivation for WildChords came from their own personal experience — they too are both instrument education drop-outs. The main reason that so many people drop out early in the process, they believe, is a matter of motivation. Although both are engineers, neither had music backgrounds, so they focused on building an app from the user’s perspective that minimizes the frustration and ups the addictiveness. Once they had a roadmap, they brought in a team of signal processing experts, music teachers, and game developers to round out the team.

And so far, it’s worked out well, especially considering the startup is bootstrapped and running on a small grant it received from the Finnish Funding Agency for Technology and Innovation. In fact, a week ago, Ovelin won the “Best Game” at the European Learning Game Competition. And, today, Ovelin will be presenting at the “Startup Sauna Demo Day” at Aalto Venture Garage (which I’m told is in essence the “Y Combinator of the Nordics and Baltics”), where the team will be courting investors.

Though WildChords will be available only for guitar and the iPad, the startup plans to add a full suite of instruments to its roster and to go cross-platform with its mobile apps as it goes.

Ovelin is also announcing a competition to submit the best voice-over for WildChord’s sound effects — particularly for the game’s monkey character. Whoever produces the best monkey sound wins a WildChord starter set. Check it out on the landing page here.

Update: I got wrapped up in talking about WildChords and forgot to mention a few other cool apps/games out there that teach you to play the guitar. There’s Ubisoft’s Rocksmith, a guitar game coming this fall, and Rock Prodigy, a realtime, interactive app that will help you tune your guitar and teach you to play. Available for iOS, requires a standard headset with built-in microphone or a basic line-in guitar adapter with both headphone jack and guitar cable input to connect. Allows you to play individual notes, for beginners and experts alike. Lots of cool features. Check ’em out.