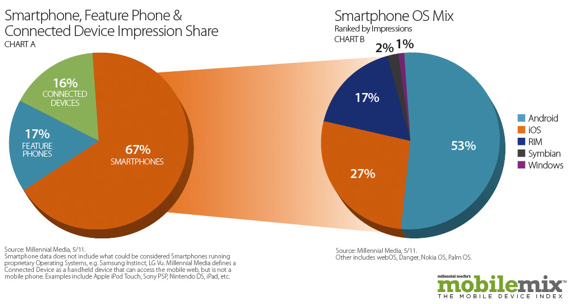 Mobile ad network Millennial Media has released its monthly monthly mobile report for May, giving us a view into how each OS and manufacturer is performing on the mobile ad network. For the sixth consecutive month, Android maintained its position as the leading Smartphone OS on the network with a 53 percent impression share. 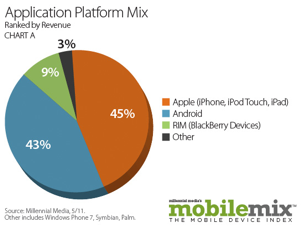 When breaking down all the revenue driven by apps on Millennial’s network, iOS apps and Android apps were very close, with 45 percent coming from iOS and 43 percent from Android. It looks like Android is closing in on iOS in terms of revenue. In April, iOS took 50 percent of app revenues, with Android trailing behind with 39 percent of app revenues.

Feature phones actually experienced a 6 percent month-over-month increase, and made up 17 percent of the device OS mix (as opposed to 67 percent for smartphones and 16 percent for connected devices).

For the 20th straight month, the iPhone maintained its position as the top individual phone on Millennial’s network by impression share. Apple was also the leading manufacturer on the network for May with a 30 percent share.

HTC moved to the number four position and represented almost 11 percent
of the Top 15 Manufacturers impression share in May, with six devices on the Top 20 Mobile Phones ranking.

Data aside, we’re all waiting to see what Millennial’s next step is as the largest remaining independent mobile ad company. Last year, the company raised $27.5 million in new funding, and is reportedly considering an IPO in the near future. The company recently acquired mobile data company Condaptive.