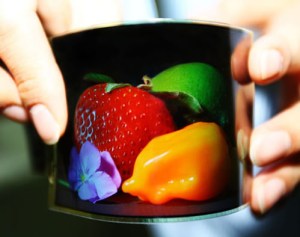 Remember those cool flexible screens Samsung was showing off early this year? Well, they weren’t just for show and tell. Samsung plans to mass-produce these suckers in 2012, and plans to put them in everything that isn’t flat.

While you would think that “flat” category would include mobile phones, there’s no rule saying the whole thing has to be curvy or flat. A phone design that has the screen curving off around the edge could be really cool. Samsung also wants to put these screens in wristwatches, though it doesn’t look like they’re quite thin enough (with battery and all) to fare well in that space just yet.