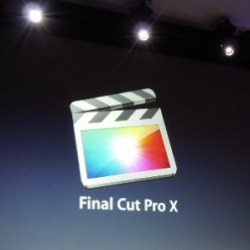 Back at NAB in April, Apple took over the Final Cut Pro Supermeet to announce the brand new version of their powerful video editor. Powerful new functionality was demoed, as well as some (to me) disturbing concessions to iMovie, but the $299 price impressed. June was the target for release, and if you’ll check your calendar, you’ll find that is this month.

MacOtakara claims to have heard that next week will be the week for the new app, as well as some Thunderbolt video accessories, like the LaCie drive and the media gear from elsewhere at NAB. We’ll find out soon.