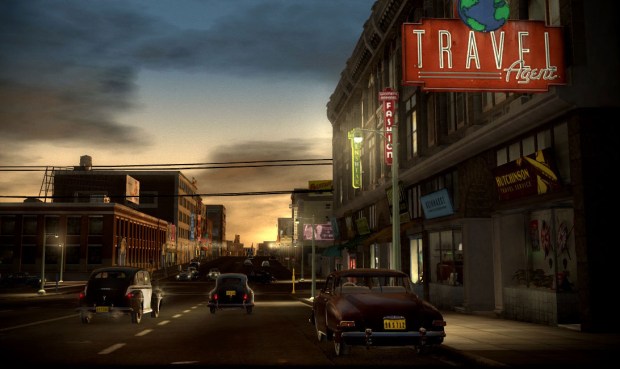 Short version: An original, immersive, and fully-realized crime adventure that suffers from a few control and technical issues, and (perhaps purposefully) vague interrogation segments. The accomplishment and authenticity of the city and your work in it, however, is beyond a doubt worth the price of admission. 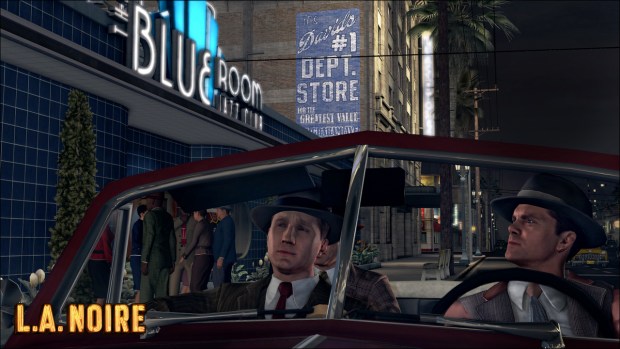 The world of LA Noire is meticulously detailed, period-accurate, and absolutely immersive. The Los Angeles of the 1940s is successfully presented in all its glory, which is an achievement in itself. While your interaction with the city on a micro scale is necessarily limited (thousands of houses and buildings are sealed to entry), that’s rarely a concern, as the curated tour of LA provided by your various cases gives you just enough slack to make you think you’re exploring freely.

There are dozens of cars to unlock, as well as landmarks worth checking out while on or off the case. Homes and businesses are filled with details and false clues for you to discover, and the overall “feel” of the city is very effective. 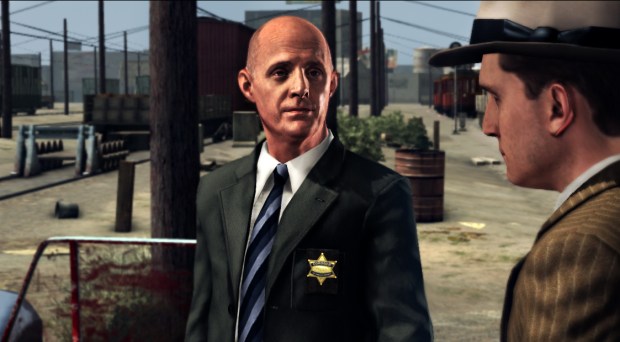 As you’ve no doubt read, the biggest technical advance in the game is the expression system, specifically the movement of faces, and I would say that it’s absolutely as good as they have said. Some characters are rendered more convincingly than others, but with a few I found myself shaking my head at how amazingly lifelike they were. In particular, an old lady at a bowling alley, directing me to a person of interest, and one of the many bartenders I met while investigating, both struck me as so much like real people that they escaped uncanny valley. Surprisingly, your own character is one of the least memorable, perhaps because his face is rather unremarkable to begin with (apologies to Aaron Staton). It’s also easy to begin to like some people and dislike others — the friendly coroner, for example, was always a welcome face.

It helps that the sound design is impeccable, with authentic music, great-sounding cars, and excellent voice acting. With a few minor exceptions, every character in the game sounds distinct and real, and there’s enough variation in the writing that they don’t seem like generic NPCs numbers one through five hundred. That said, the generic NPCs could have used a little more sprucing up. They suffer from line repetition syndrome, even in the police station where you start your case. How many times did I hear the same guy yell “I say we bust in there and get the goddamn evidence” as I exited the briefing room? With so many lines of spoken dialogue, it would not have been amiss to record a few more atmospheric ones. 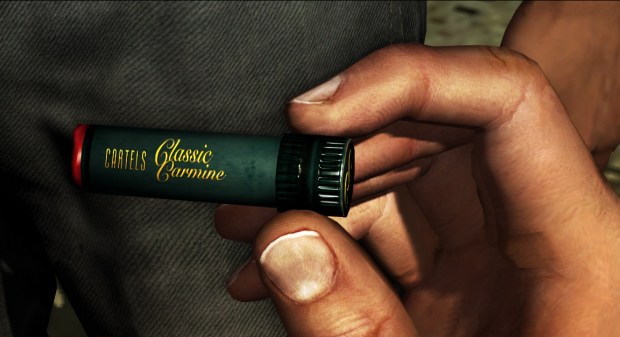 The writing and cases are solid, and while there are a few tropes resorted to here and there (the boozing, religious captain at Central comes to mind), LA Noire consistently bats above the gaming average on dialogue, plotting, and so on. 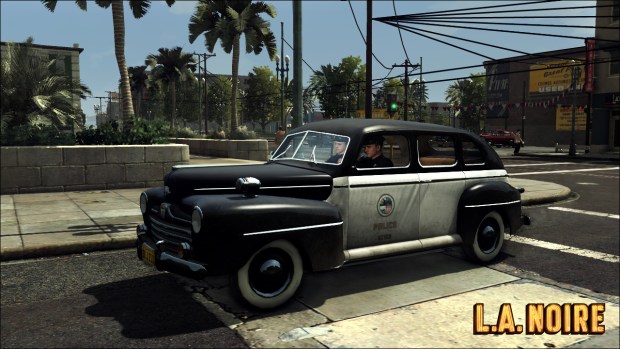 You’ll be doing a lot of driving in this game, and while you can opt to have your partner drive (effectively warping to the location), it’s nice to actually get to know the city a bit and admire the world that Bondi Studios has so lovingly created. But the drivers of 1940s Los Angeles are apparently all psychotic, blind, and drunk. They seem to like nothing more than stopping short, ignoring signals, failing to pull over when you have your siren on, or merging into your lane with no warning. Most vehicles handle tolerably well and you can avoid these human land mines if you’re wary, but it begins to feel like a chore when you have to cross town a few times and you’re worried more about dodging traffic than solving the case. Pedestrians scare easily, but generally are car-savvy and don’t throw themselves in front of you, as they often do in city-based sandbox games.

Investigation is a mixed bag, though overall it’s so compelling and original that I feel bad criticizing it. Finding clues is effected by looking over the scene and picking up suspicious objects after being alerted by a piano cue and vibrating controller. Most of the time it works, but sometimes it feels hokey. 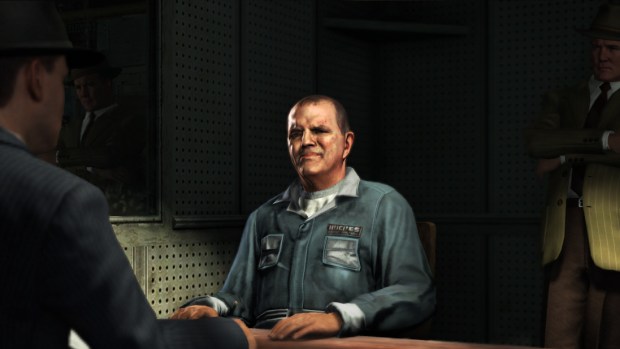 The vaunted interrogation scenes don’t fare so well. When interviewing a subject on a clue, you have three responses: “Truth,” “Doubt,” and “Lie.” Where the line is between these things, I simply can’t tell. The “correct” response to statements seems at times to be completely arbitrary: an old lady might require aggressive badgering to reveal information, though by all appearances she is being truthful and forthcoming. You can redo action sequences, but not interrogations, though you can use “intuition” to make things easier and reduce your response choices. Ostensibly you can observe the subject and make your decision on that, but despite the lifelike faces, there seemed to me to be no consistent link between the telltale signs of lying and the actual need to call them out — or signs of truthfulness and the need to coax. Again and again I heard the minor chord of an interrogation failure and had absolutely no idea how I could be wrong. Sure, mistakes are part of the game (and police work), but it was rarely clear why the mistake was a mistake. 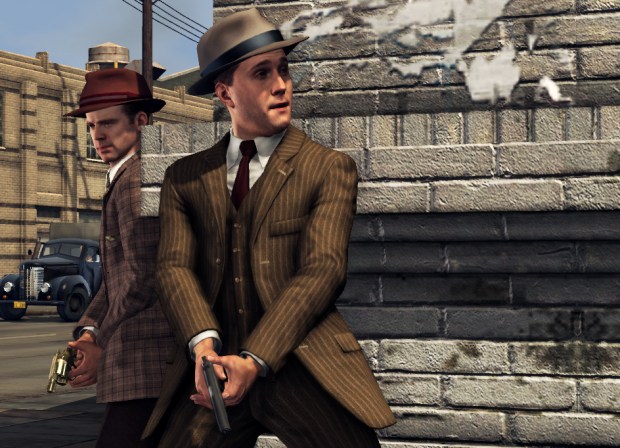 Action sequences, a definite minority in terms of gameplay time spent, are competent but occasionally clumsy. Autoaim is your friend, but in confined spaces the camera is sluggish and often poorly positioned. The running-perp sequences are fun, however “on rails” they are, and the car chases are thrilling, if somewhat contrived. Hand-to-hand fighting is fun, though.

The game runs well and looks fantastic indoors, but outside you’ll find lots of texture pop and filter lines, as well as an occasional stuttering framerate. The 360 is obviously working hard, though, and most failings can be attributed to technical limitations.

While the gameplay would benefit from a little clarification in the interrogations, and action suffers from the usual third-person-actioner shortcomings, LA Noire is a huge accomplishment. Artistically and technically it excels, and gameplay is not only original but compelling as well. The single-player campaign isn’t conducive to repeat playthroughs, but you’re getting your money’s worth with the 30-40 hours of story and many optional “street crimes” and unlockables. Here is another powerful argument in the “games as art” debate, and a strong early contender for game of the year.

I’ve got a PS3 version of LA Noire (and a sweet shirt) to give away to a lucky reader. Just comment below (once) with your favorite cops and robbers game, whether it’s NARC, GTA 4, or whatever. I’ll pick one randomly on Monday to win. You must be 13 years old and in the US to enter!

Update: it’s over! The winner has been notified. Thanks for entering.