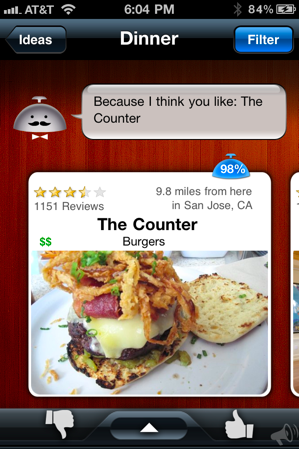 Between Yelp, Foursquare, Facebook, Google and countless startups, there’s no shortage of services looking to offer you restaurant and activity recommendations while you’re on the go. But there’s a reason there’s so much competition: as smartphones become increasingly common, this market is going to be absolutely massive. Which means there’s plenty of room for more than one winner.

Which brings us to a new company called CleverSense that is about to join the fray. Led by CEO Babak Pahlavan, the company has spent the last two years working on an algorithm that Pahlavan says is better at making recommendations than many of the existing services. And he has a strong pedigree to back that claim up — his advisors include Prof. Jeff Ullman of Stanford, who was Ph.D. advisor for Google cofounder Sergey Brin.

CleverSense is currently putting the finishing touches on an iPhone application called Seymour, which it says will serve as a “Pandora for the real world”. The app isn’t out just yet, but I got a walkthrough of an early version, and it has potential.

Seymour’s main mission (he’s a robot) is to give you suggestions for places to eat and things to do, without requiring the user to enter a query. Fire up the app, tap a button to point Seymour in the right direction (be it a restaurant, activity, cafe, bar, etc.) and the app will immediately give you a list of suggestions tailored to your tastes.

The app does this by attempting to learn what you like. The first time you boot Seymour up you’ll be asked to complete a brief learning process (you enter a restaurant you like, the app will present some suggestions, and you tell it which ones it got correct). And then as you use the app it will use your interactions to further improve the algorithm.

My time with the application was limited to only a few minutes, but its initial recommendations were good (then again, my tastes aren’t exactly eclectic). One other nifty thing: CleverSense has crawled the web to build a list of attributes associated with each venue; it will tell you which of these attributes it thinks are relevant to you (see the screenshot below).

So how exactly is this different from the recommendations given by other applications? Pahlavan says it’s a matter of algorithms — many services use something called collaborative filtering, which uses data from other users similar to you to make recommendations. Seymor is combing that with a different technique called model-based learning, which tries to build a set of recommendations for each individual user. This is how Pahlavan describes the distinction.

Model-based learning facilitates deep personalization around the individual user and really focuses on entities that match YOUR specific tastes, not just the aggregated recommendations of others. Model-based learning can act like the friend that knows you well and knows what you like when and where.”

We’ll have more on the app when it launches. CleverSense has raised $1.6 million so far, and has a team of eleven (eight in the US, three abroad). 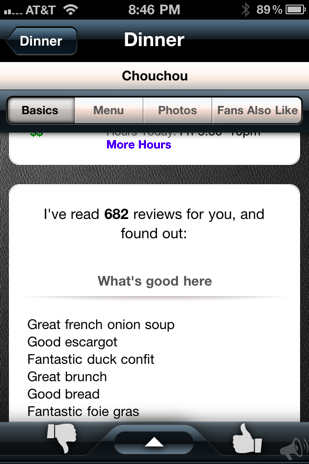