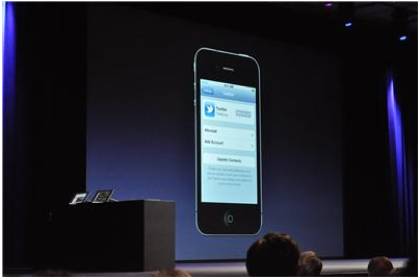 Apple just announced a fairly in-depth ‘Twitterification’ of the newest version of its mobile OS, iOS 5 (which we reported last week to be taking place). As Apple says during the WWDC keynote today, there are 1 billion Tweets per week now and we want to make it even easier for all our customers to use Twitter in our iOS products.

Now Apple provides a single sign-on for Twitter use on the phone, and with any app you download, it will just ask you for Twitter credential permission. There’s no need to re login. Apple has taken it a step further to integrate Twitter into many of its own features and applications like camera and photos. You can also Tweet articles and content directly from Safari, Maps, videos from YouTube, etc and add location as well. And Twitter photos and @usernames can be autopulled into the phone’s contacts.

Here’s a link to Twitter’s announcement of the integration. As Twitter notes, the feature will soon be arriving on iOS 5 iPhone, iPad and iPod touch devices. Developers will also be able to take advantage of single sign-on capability, letting you tweet directly from their apps too, says Twitter.

Apple’s choice of Twitter for this in-depth integration fits in nicely with Twitter’s recent rollout of its own-photo sharing service. Surely, the ability to take a Photo and Tweet directly from the camera app should help increase usage of its photo-sharing feature.