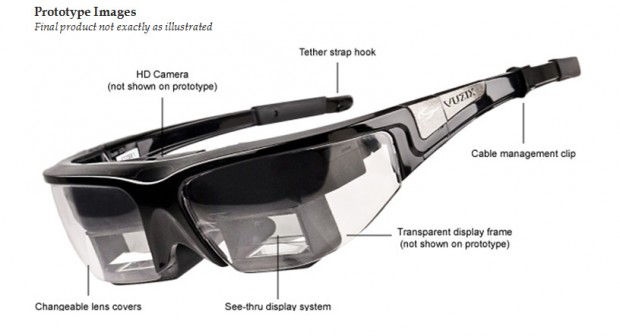 The week of May 16th, Vuzix — makers of military and consumer grade Augmented Reality eyewear — announced their newest line of AR glasses as the STAR 1200. As their press release states, STAR stands for See-Through-Augmented-Reality and describes the killer feature of this new concept — transparent displays. Rather than viewing small, mounted video screens in the eyewear that show you both the “real” and “augmented”  content at the same time (transferred from external cameras) the STAR 1200 has transparent displays for the “augmented” content and you view the real world the way you normally would. This is different from previous Vuzix models like the Wrap 920AR which uses camera mounts and displays for all viewing.

This is not really news, since the announcement went out at a couple of recent AR conferences, however I did get a hold of some demo images for you all to look at in case you were not at either of the conferences. These are prototypes and are likely to change as more accurate renderings of the product become available nearer to the planned launch in August.

I spoke with Vuzix CEO Paul Travers and he also let me know that the STAR 1200 contains autonomous motion sensors, so you can connect the glasses with software running on a mobile device (like Layar or Junaio) and use the glasses’ motion sensors to align the augmented content rather then relying on the mobile device’s gyros, etc. This will be more accurate.

So what does it look like when you peer the the transparent displays? The image below shows an example of how the augmented content is overlaid onto your view. Here, a target is placed on the gentleman in the image. 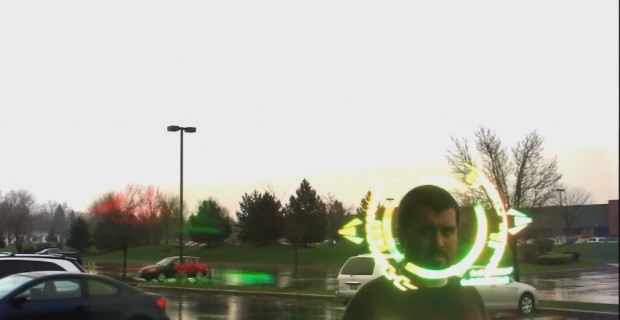 I also received a demo video that was output from the Wrap 920AR glasses. In the video you can see some different augmented content in the shape of cars, ships and, of course, dancing robots. Pretty neat.

At last, you too will be able to look at the world the same way our embattled Governator did back in the day while hopefully doing something a bit more productive than hunting down some chick named Sarah Connor. 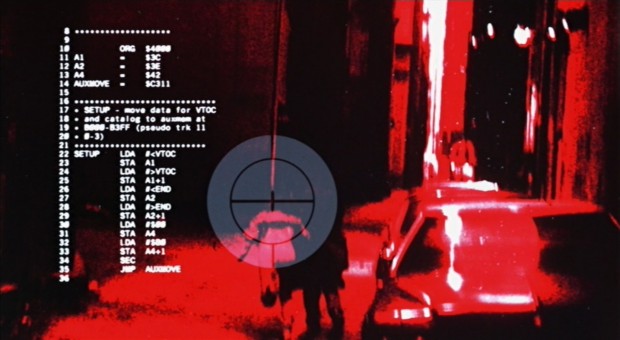