If you’re like me you’re probably too preoccupied to get political on a daily basis, even though you are passionate about social activism and causes like education reform. But what if an app made it easier for you to get informed and take political action on the issues you care about? Would you get involved then?

Launching in the app store today is ONE, an iPhone app that attempts to modernize political call to action, by making it easy to stay up to date on issues and take actions that actually might cause actual social change from within the app itself. The app basically gives you information about various advocacy movements like funding childhood vaccines for kids that can’t afford them and then lets you call a senator, sign a petition or join up with a real life rally for causes in order to raise awareness.

On the tech side, the app uses your zip code to find out which local policy makers could influence decisions in ONE’s fight against extreme poverty and preventable diseases.The app also offers a way to track how ONE is affecting change through its blog, the ability to communicate with other ONE members in the field and offers a friend recruiting feature as well.

ONE was created in a partnership with @radical.media and the Bono-backed ONE, which goes by the admirable slogan of “We’re not asking for your money, just your voice.” Making an “app for that” is a logical step for a company that mobilizes its over 2 million users to raise public awareness on issues they care about like education, development assistance and maternal and child health by campaigning instead of asking for a donation.

While there’s no telling just how much an app for activism will catch on, just making it easier to be involved in your community and beyond makes the the world a slightly better place. 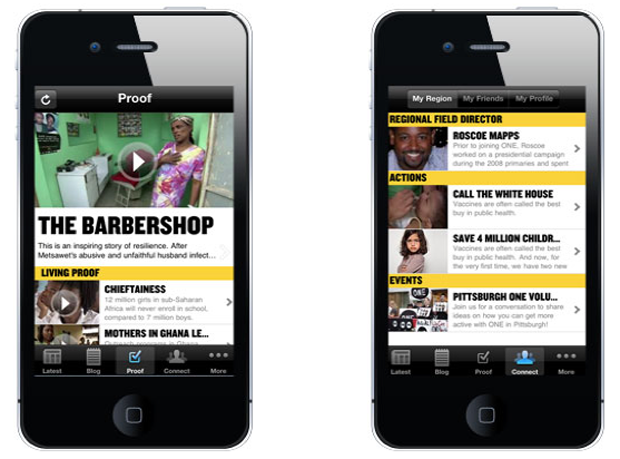