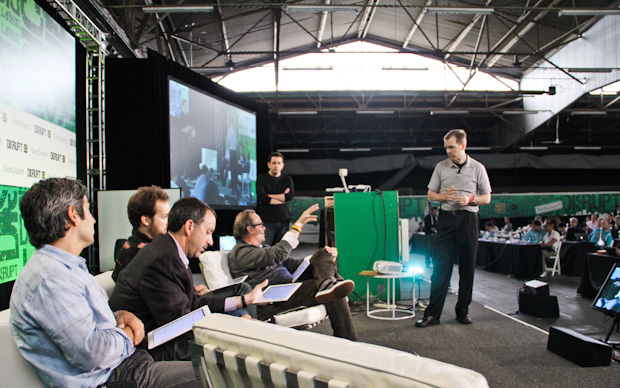 Editor’s note: The following guest post is by David Chase (@chasedave), the CEO of Avado, a healthcare startup that was one of the 30 Battlefield Finalists at Disrupt NYC last week.  Chase was going to publish this on his blog, but we asked him if we could post it here instead to share with everyone.  We didn’t attempt to correct any misconceptions in the post to keep it true to how Chase experienced the event. You can watch his presentation in the video at the bottom of this post

There are many local, regional and global startup competitions that startups can compete in. I’m a big believer in the value of these startup competitions for two big reasons—they are a great forcing function to ship your product and refine your ability to pitch your business. Even if you have no plans to raise money, you will have to pitch your business to achieve your goals.

My startup (Avado) is a Patient Relationship Management platform for health and wellness providers such as doctors, physical therapists, nurse practitioners, health coaches, physician assistants and personal trainers. We decided to pursue the opportunity to compete in the TechCrunch Disrupt startup competition. To my knowledge, it is the most competitive and well-attended startup competition even though I perceived it to be more oriented towards “fun” technology.  Though there’s a consumer aspect to Avado, the primary initial focus is on the B2B aspect (the consumer side has a Connected Health Record that is akin to a Mint/Quicken for healthcare) whereas a large percentage of the Disrupt competitors are only consumer-focused.

Each startup competition has its own selection process. In the case of TechCrunch Disrupt, a triumvirate of Erick Schonfeld (Co-editor of TechCrunch), Heather Harde (CEO) and Michael Arrington (Founder) evaluates the companies after they have winnowed down the first list of companies. My understanding is that two out of the three of them need to greenlight a company to be a finalist. During the course of the TechCrunch Disrupt event, Michael referred a couple times to Erick Schonfeld veto’ing a company. It wasn’t clear whether that was a joke or not, but he appeared to be serious.

We were fortunate to be one of the startups that made the first cuts. The next step was to schedule a demo with Erick. We scrambled to pull together what we thought was a coherent flow. Following the demo, Erick asked some questions regarding our business model and the product. At the end, I asked him for his frank feedback as this was one of our first demos so I knew it was pretty rough. He gave me some very useful feedback. At the end of the call, he said we would hear from someone to schedule a demo with Mike or Heather.

With the benefit of hindsight, my hunch is that the fact that we were very coachable and significantly improved our demo and story-telling was a factor in making us a finalist. The next demo was with Heather (also via the phone/screenshare). I took her through the updated demo and it followed a similar process as my call with Erick. At that point, we were told that we’d hear in a couple days if we’d made it to the finals. As it turned out, it took almost a week.

We received the news we’d been selected via email which, of course, we were elated to receive. The next step was to schedule a visit where we’d receive more formal, face-to-face coaching on our presentation and we’d also incorporate more about our business model and go-to-market plans. My impression is the focus that Erick, Heather and Mike have at this point shifts from a weed-out mentality to a coaching mentality as they want to have as high quality an event as possible. When I took Heather through our presentation/demo, it went ten and a half minutes (vs. the 6 minute target). Since we had a relatively complex product and a dual customer (healthcare provider and consumer), she actually suggested we flip the order around in our scenario to lead with the doctor and then review the patient side of the equation. Her feedback was invaluable to tightening up our presentation. We subsequently took her through a revised presentation/demo that fit well within the 6-minute limit.

From there, it was time for the final preparations and travel to New York. They suggest that one person “drive” the demo while the other person speaks. At that point, I needed to coordinate with my co-founder, Bassam Saliba, so that we were in sync for the demo. We did several practices before we felt satisfied with our synchronization. We also took the precautionary measure of doing screen captures of all of our demo in the event of connectivity issues.

Once we arrived in New York, we went through the scheduled technical run-through on stage. We also found out we were in the second day of “Battlefield” presentations. They grouped the startups into groups of similar companies (e.g., search, location, etc.). We were in the “Disrupting the Real World” group. From reading the program, I was able to review who our judges would be but it turned out two of the four couldn’t make it—I think it had something to do with the Icelandic volcano. One who didn’t make it was Beth Comstock who is GE’s CMO which was unfortunate since GE has a big medical division. I was hoping for someone with domain knowledge since it’s challenging for judges without any domain knowledge to judge whether a B2B startup in an unfamiliar vertical market is taking a sound approach or not.

Finally our time to present came. As fate would have it, our DNS provider decided to play mind games with us. Literally while the company before us was presenting, our site became unavailable which we learned when one of the guys back at the office texted us that there were issues. I had mentally prepared for something like that to happen so I wasn’t too worried. Bassam’s PC was already on stage so he couldn’t test it. Fortunately, I had mine and quickly fired it up. To our pleasant surprise, I was able to get to the site so we rushed from backstage with a minute or two to spare.

You can be the judge of how well we did (see Avado is the Mint for your Personal Health Records. or the video below) but we were generally pleased with how things went. After our presentation, the judges had 6 minutes to ask me questions. I thought all of the questions were reasonable. The main thread of questions were around the dual customer (i.e., patients and providers) approach since that adds complexity and generally startups should focus as much as possible.

The final comment and question came from Bijan Sabet of Spark Capital. He made the point that he didn’t understand why a problem as big as the issue in healthcare we were addressing hadn’t been resolved yet. Bijan followed that with a suggestion/critique that he thought we should just start with the consumer and that would drive the change. While I thought I had a decent response (we are focusing on partnerships with health-related non-profits that span both patient and provider), I kicked myself later for not having the better response. That is, the response to his comment that he was surprised it hasn’t been solved is the very fact that parties have tried to solve either the doctor side or the patient/consumer side but no one had tackled the bridge between the two. The takeaway for other startups is that you can’t anticipate every question so the sooner you start putting yourself out for critique and feedback, the better. Thanks to Bijan’s comment, I believe we can turn what may have been viewed as a weakness into one of our key points of differentiation and strength.

As it turned out, we were part of the group that had the eventual winner (Getaround). They generally picked one company from each of the groups to present on the final day of the event. I predicted from the moment I saw Getaround that they’d be the winner. They had the perfect mix of a tight presentation/demo, they were very well resourced (they’d already received significant funding—enough to ship a Tesla from San Francisco to New York!) and were very similar to a deal that got away from some of the judges (AirBnB). It was fun to see their excitement winning. We felt like we won the minute we found out we were a finalist. While hardly a guarantee of success, winning or being a finalist in any startup competition is a nice seal of approval that can help the business. The coverage we got from the tech and venture capital publications such as TechCrunch, VentureBeat and GeekWire were terrific, since we’ll be fundraising in the future. The VentureBeat coverage was a total surprise.

Would I do it again? No question.