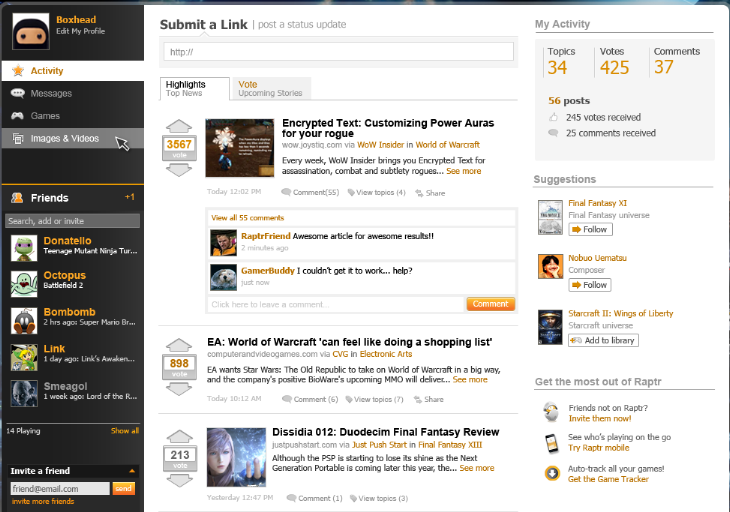 There are a lot of companies out there trying to leverage the social graph to make discovering new products, services, or tools — whatever the case may be — easier and more personalized. But, when it comes to games, few do it better than Raptr.

For those unfamiliar with the company, Raptr is a social network that revolves around gaming, which allows users to keep tabs on what their friends are doing throughout the gaming world, offering recommendations for games to play, accomplishment updates, and a host of other features. One of Raptr’s coolest features is its multi-protocol chat client that allows gamers to see what games their friends are playing in realtime, whether they’re on PS3, Xbox 360, or PC (including casual Flash games, Steam and Xfire) — even if they don’t have Raptr accounts. If one of your friends is online and playing a game, for example, you can send messages to them from the Raptr client regardless of which platform they’re on.

What grounds these features and gives them value, according to CEO Dennis Fong, emanates from the fact that Raptr is “all about the data”. Users opt-in to sharing their personal data (and Fong says 99 percent of users have opted-in), allowing Raptr to pull their entire profile from, say, Xbox or PS3, etc., to see how far they’ve progressed, what achievements they’ve unlocked, what games they’re buying, and more. It is this data, along with Raptr’s automated check-in functionality, that makes Raptr a fully-loaded social and recommendation platform.

This data is also being offered (for free) to analysts, journalists, and more, so that they can watch current trends in gaming, like how many people are playing Madden and playing Cityville. And as long as this data never ends up in the hands of advertisers, it can become a goldmine, with a ton of prospective uses — like so many other discovery and recommendation services, the more it learns and the more data collects, the more useful and personalized it becomes.

Riffing off its dataset and recommendation algorithm, today Raptr is launching a cool new feature: a personalized, social news platform that serves you the latest news that’s relevant to the games you’re playing now. The new feature is kind of like Reddit or Digg for gaming, and looks fairly similar to the Facebook news feed. Like Facebook, all the news you’ll see in your feed comes from other users in the platform, with the exception of course being that the news is algorithmically served to be personalized to your gaming tastes. So, it’s discovery mechanism is leveraging both your social graph and your personal usage history.

Another difference with the Facebook news feed is that you can vote a piece of news up or down, you can sort through news taxonomically by category, or you can hide the content if it’s not contextually relevant to you and your tastes. The feed is also partially curated by a content team at Raptr, to ensure that the feed includes that human element, which is intended to ensure total personalization and relevance. Furthermore, unlike Facebook or Digg and Reddit, there’s no front page, each user has a news feed that’s personalized to them, so everyone sees something different.

Raptr has raised $27 million in funding from Accel, Founders Fund, and several other well-known angels and VCs. Founder and CEO Dennis Fong, whose past companies include Xfire, Lithium, and Gamers.com, said that the platform currently has over 8 million users, and is pulling in over 500K users per month.

Considering that Raptr users can now submit and share a mix of content including news, videos, screenshots, status updates, and reviews, chat with friends in-game across platforms, and that its service leverages a mass of data to provide excellent recommendations and game discovery, the startup has built one badass platform. I don’t like using this word, but Raptr’s services are truly “robust”, with recommendations, discovery, and a personalized news feed, it combines Pandora-like discovery qualities with Reddit-like news offerings. For avid gamers, it’s got some bells and whistles worth checking out.