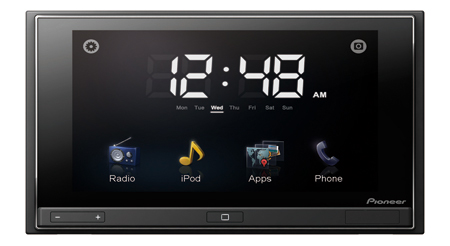 Here it is, ladies and nerds: the Pioneer AppRadio. As the name implies it’s centered around applications in a smartphone-ish sort of way. All the big boys are here: RDIO, Pandora, and Google Maps along with the driver-centric apps of INRIX and MotionX-GPS Drive. This is possible through the Pioneer AppRadio iOS app that serves up data and app access to the head-unit from a connected iPhone or iPod touch. It lacks the native iOS support we had incorrectly heard it has, but features enough compelling features to earn a good deal of respect.

The aftermarket audio scene has been somewhat stagnant over the last decade. The biggest innovation was navigation and perhaps the addition of a USB host, but GUIs and even prices have stayed about the same. Pioneer has a real chance with the AppRadio to push the rest of the industry into embracing connected data and, in a way, learn to take a back seat to the smartphone by servering a more companion role — as it should be.

A WVGA (800 x 480) 6.1-inch capacitive multitouch serves up all the action. But there’s nothing behind it. The screen doesn’t flip down to reveal a fancy iPhone dock or even an optical drive. iPhones and iPod touches connect to the unit through a Dock Connector cable that hooks into the rear of the radio so it’s up to the installer to hide this wire.

Updates and more apps come by way of a Pioneer iOS app. When an iDevice is connected it unlocks all the wonders of Google Maps including search, routing, directions and even drop pins bookmarks. The iDevice serves up reformated apps to the AppRadio and Pioneer wrangled several popular apps to hit the device at launch and custom versions of RDIO and Pandora are currently available.

This iDevice dependency comes at a price, though. While the AppRadio can certainly stand on its own without a connected device, it loses most of its appeal. Also, Android owners need not apply. Pioneer isn’t servering their kind as Bluetooth connectivity seems only for phone functions and not for streaming content or data connectivity sharing. The AppRadio doesn’t have an optical drive and I worry about the capacitive screen handling direct sunlight. Still, the AppRadio is a welcomed addition to the car audio aftermarket scene.

Pioneer hasn’t announced the price or exact release date yet, but the press announcement states that the “AppRadio will be available in late June with a suggested retail price below $500.”

Side note: big props to our graphic guy Bryce for making a nearly accurate hardware rendering based on blurry FCC pics and several emails from a tester. The OS is clearly wrong, but he nailed the button design.