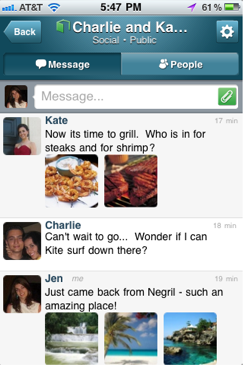 We’ve written previously about NearVerse’s mobile app LoKast, a proximity based mobile social network. Today, the company is debuting a new version of its iOS app, which combines group messaging with location proximity and media sharing.

On the app you can create spaces, which are visible by others within the app in the same physical place. These spaces essentially serve as min-social networks of sorts, where people can chat and share links, videos, images, music and more. Users can also make networks completely private.

Previously the app was more of an open network, where users could find and share content with any other user that was in their proximity. Now with the ability to create ‘spaces’ within the app, Lokast becomes more of a group messaging app with a dash of location-based discovery.