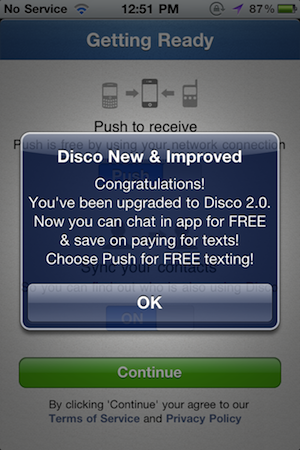 Google seems to be going out of their way not to promote Disco, the group messaging app built by Google’s Slide team. When we first revealed the existence of the iPhone app and website (at disco.com) in March, Google wouldn’t comment on it. A few weeks ago, they released an Android version of the app as well. Was it touted on a Google blog anywhere? Nope. And yesterday brought version 2.0 of the app. Again, nada.

So we’ll do Google’s job for them and tell you that version 2.0 of Disco is a nice upgrade. When we did a first look at the app, we noted that while it looked nice, it was fairly limited because it relied solely on SMS. Version 2.0 adds the ability to move away from SMS as use Push notifications to receive messages.

The move is an important one for Disco to better match its competition. GroupMe (which, coincidentally was born at the TechCrunch Disrupt Hackathon a year ago) added Push capabilities to their app in March. Beluga (which Facebook acquired in March) has been more based around Push notifications from the beginning. The ability to use Push Notifications over data plans saves customers money versus SMS.

Also new in 2.0 is the ability to chat within the app (as opposed to only over SMS). This is another big feature as it makes the app more instantaneous and chat-like (again, more like the competition). And there’s finally the ability to manage groups within the app. Previously, you had to do this on the website.

So, now that Disco is up to speed with regard to competitors, will Google finally start promoting it? We’ll see. Perhaps this is all a part of their we-will-downplay-our-social-strategy-at-all-costs movement. That’s too bad, Disco is definitely worth a look.

You can find Disco for iPhone here and for Android here.