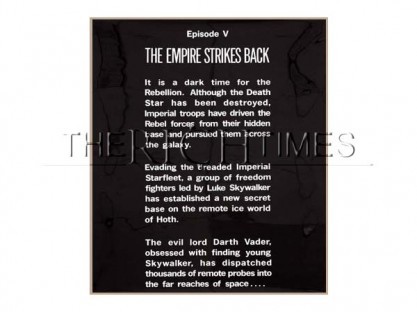 If you’re a fan of Spock, Orko, Sulu, and all the rest of those great Star Wars characters, you may want to get out a few thousand dollars when the acetate crawls from the original movies come back on the market because they’re clearly going cheap. For example, at a relatively unpublicized auction someone picked up the original Empire Strikes Back crawl for a mere $40,000, which, knowing the depravity of the average sci-fi fan, is wildly low.

The crawl was sold at at Saban Theatre in Beverly Hills. It appears that the original car from Chitty Chitty Bang Bang sold for $2.6 million at the same auction, a number that suggests a profound disrespect for the canon of science fiction in America and an equally odd fetish for Dick Van Dyke.