Toshiba — the diversified tech company best known for its consumer electronics, lighting and HVAC systems — is coming after the smart grid market in Europe and the U.S. with the acquisition of a Swiss smart grid tech firm, Landis+Gyr. Toshiba announced a commitment to acquire Landis+Gyr for $2.3 billion today.

The company makes power distribution, metering and smart home software and systems, which will supplement Toshiba’s utility-related offerings and give Toshiba reach into new markets in Europe, the U.S., China, India and Brazil, where Landis+Gyr has already gained some traction, according to a company statement (link, above).

While Toshiba sells hardware used by utilities — in substations, on poles and transmission lines, for example — this is their first major move to grab a piece of the energy management business on the metering and consumer side.

Silver Spring Networks closed a round of financing in December 2010, which brought its total capital raised to about $250 million. It also prepared to go public last year, at one point hiring Morgan Stanley and Jeffries & Co. to do so, with an alleged goal for a $3 billion valuation reported Fortune’s Dan Primack, then.

Silver Spring Networks already counts large North American utilities like Florida Power & Light, and Pacific Gas & Electric among its customers. The company did not respond to a request for comment on its IPO plans or the impact of the Toshiba deal to the industry in time for publication. 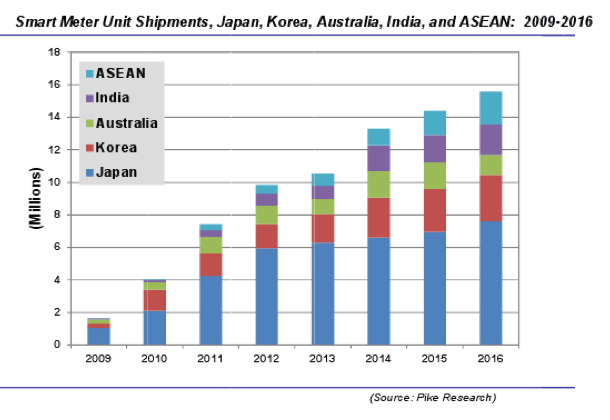 “Landis+Gyr itself once planned an IPO. We’re not certain why the business took the private sale route. It’s not clear how this could impact Silver Spring Networks’ IPO plan.

It seems that Silver Spring Networks may have had expectations of a valuation that would be pretty high relative to their global reach, and breadth of products. One challenge in this market — there are a lot of big, smart grid investments to be made — is that growth is likely to happen in waves, by region.

Pike forecasts growth in North America reaching $1.7 billion for smart meter, hardware related revenue by the end of 2012, then declining in the region followed by growth in Europe, then Asia.

It will be interesting to see what Toshiba can do for Landis+Gyr in Asia, or vice versa. The big prize of the market in China remains relatively closed. Smart metering vendors from outside of China itself don’t see a lot of business there. But the 15 to 20 smart metering companies that manufacture there, do.”

Smart grid companies that have exited through successful M&As, of late — including Mincom which was acquired by ABB this month, or Opal Software which was acquired back in October 2010 by GE Energy — have been involved in operating software, and back-end, IT management more than metering for the consumer, like that provided by Tendril or EnergyHub, or on metering in general.

Gohn predicts better exits in the smart grid sector for software and services startups serving the U.S. market, rather than hardware and metering, in the near future.

Graphic via Pike Research, from the Smart Meters in Asia Pacific, q1 2011 report