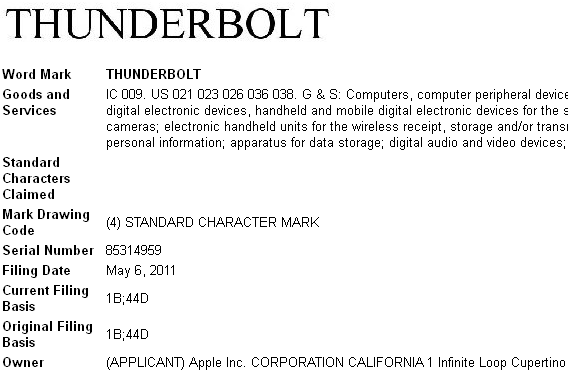 A strange development on the Thunderbolt front. Intel’s new high-speed interface certainly made its big debut on Apple’s new MacBook Pros, but why would Apple be trademarking it if it’s Intel’s technology?

We heard early on that Apple was “integral” to creating the Light Peak interface, but those reports were later contradicted, and it became clear that Apple was more a last-mile partner rather than R&D. Not that there’s anything wrong with that. 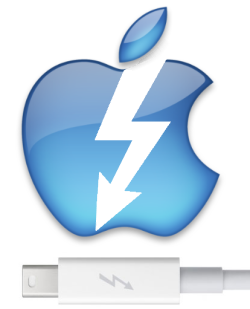 So why the trademark? My guess is that “Thunderbolt” is Apple-specific, since it uses Apple’s Mini DisplayPort form factor — and while other implementations are possible (Sony appears to be doing a USB-shaped one, like the prototypes), it could be that Apple is trying to push their version as the de facto standard.

If Apple MDP-style port caught on, manufacturers and OEMs would be forced to license it from them. Free of charge, sure, but it’s a sweet bit of leverage to have on the other guys. On the other hand, it could backfire and become another FireWire if their version doesn’t gain traction.

And remember, Apple is just claiming the name “Thunderbolt,” not attempting to wrest control of the interface. It could be this was all worked out from the beginning. It depends on a lot of factors that aren’t even close to predictable yet, so let’s just watch and see.