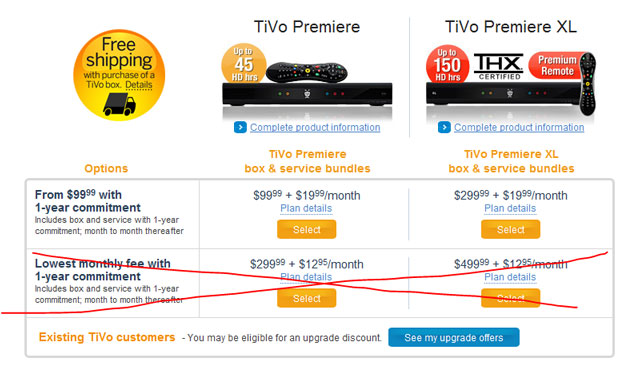 TiVo is about to unveil a new pricing scheme that will lower the upfront cost of the hardware by raising the monthly fee. Actually, what they’re doing, is going to a single pricing model rather than running two separate. The lower hardware, higher monthly fee scheme was unveiled a while ago and still lives on with the old-as-TiVo high up front cost, low monthly fee pricing. That’s apparently set to change later this week.

Right now, as in today before the switch, you can buy a TiVo Premiere for either $299 up front and $12.95/month or $99 and $19.99/month. Scratch the first option. The lifetime subscription fee is also changing, going from $199 to $299 and raising the overall lifetime cost of a TiVo when considering the hardware and lifetime fee from $468 to $498.

TiVo is as methodical as a CE company can be. Clearly the company ran with the two pricing schemes side-by-side as a trial and the new one bested the old model. In many ways TiVo’s new pricing matches the subsidies cell phone pricing the US consumers are very familiar with. It does however make owning a TiVo a rather costly option and could easily reach $30 a month when considering TiVo’s price, a CableCard and only one streaming service like Netflix.