OpenTable’s co-founder Chuck Templeton is launching his latest venture today—OhSoWe. The site essentially aims to bring together neighborhoods. It’s sort of like an online version of a block association.

On the site, users can create a “neighborstead,” to form a block club, neighborhood association or a neighbor-based organization. People have to create profiles and join the site (there’s no Facebook integration). To join the site, you enter your address, and OhSoWe will automatically show you neighborhood activity near your home. People can message each other, post notices, organize meetings, and more.

The idea behind OhSoWe is to encourage sharing between neighbors, whether it be food, offering skills (like gardening, handy work), transportation or babysitting. Templeton tells me that currently, there really isn’t a way for neighbors to communicate with each other in a group setting besides via email.

One feature that is noticeably missing in the site is a deeper Facebook integration. It seems that it would be much easier to import my social graph from the network as opposed to creating it on OhSoWe. And users could create groups on Facebook around their neighborhood. That being said, I agree with Templeton that there is a need for a more interactive neighborhood-focused communications app that trumps email. Perhaps OhSoWe is the answer. 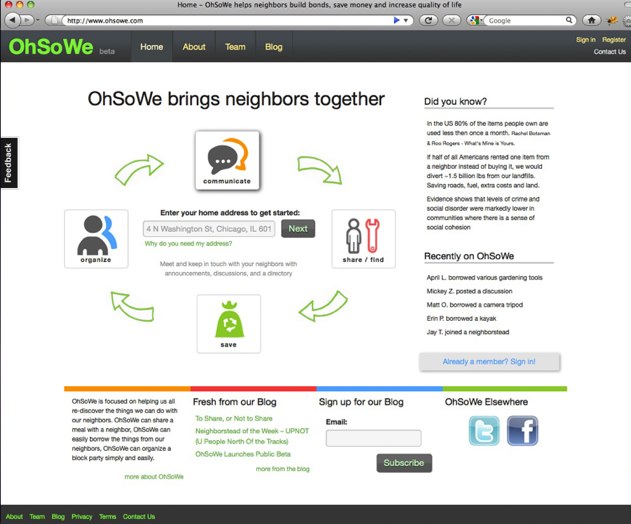