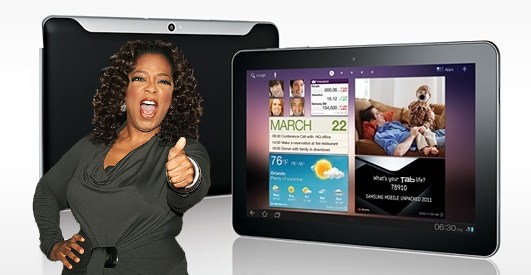 The giveaways at Google I/O have become one of the most-publicized features of the conference; after all, the new features and frameworks matter to developers, but Oprah MomentsTM tend to resonate on the internet. Previously it was handsets being given away, but this year, with Android handset numbers blocking out the sun and tablets underdeveloped, it was Honeycomb that ended up in developers’ laps. Specifically, Samsung’s Galaxy Tab 10.1.

Yep, 5000 of them are being distributed to Google’s dev base. This is pretty cool, since Samsung was previously a bit gun-shy about its new tablet, even publicly saying they had some work to do after the iPad launch. But the relaunch in March had them confident again, though the release was distant enough that we thought they might still have some work to do. I guess the developers at I/O will be able to tell us whether that’s true.

If you’re looking to get your own, check eBay in a couple hours, or else wait until June 8, the planned release date for the 10.1. Personally I’m thinking about that 8.9 — a little smaller, but with mostly the same specs. The 10.1s given out at I/O won’t ship with Android 3.1, but will be getting it soon.