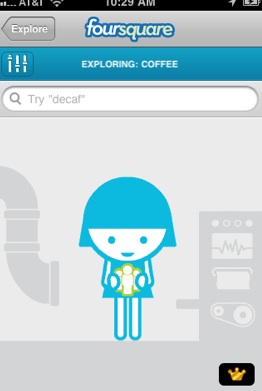 When Foursquare upgraded its mobile app last March at SXSW, it added some excellent new features which made the popular geo app even more compelling. Among these is a revamped leaderboard which shows how many points you’ve earned in the past 7 days compared to just your friends (I know I check in a lot more now in the hopes that I can one day beat Fred Wilson). The other one is a new Explore feature that gives you recommendations of nearby places to eat, drink, and shop based on where you are and your friends’ past check-in behavior.

Now these two features, along with the information users get after they check-in, are available to outside developers via Foursquare’s API. That means that other mobile apps can borrow some of Foursquare’s game mechanics by showing users where they stand on the Foursquare leaderboard (which makes sense for apps which allow you to do a Foursquare check-in).

The Explore API could potentially become much more meaningful. As Foursquare starts to do a better job suggesting places to go, down the line it could tie its deals into those suggestions as well. Watch this space.