“It’s probably something that Don Draper would come up with if Larry and Sergey were his clients.”

By now you’ve probably seen or read about Google’s warm and fuzzy ‘Dear Sophie’ commercial, which debuted last week and aired during a coveted spot on Saturday Night Live this weekend. In the commercial, which was inspired by a true story, Sophie’s dad Daniel sends her emails about the special moments in her life like her first birthday, Father’s Day and the birth of her sister, as well as general dad silliness like clips titled “Giggles.mov.”

While the emails are addressed to Sophie, and the author refers to her in the 2nd person, (“You wanted to name her ‘Salt.'”) it is actually against Google’s TOS to create a Google account for your kid, or anyone who is not over thirteen years old.

“After finally deciding on a name for our unborn girl, I wanted to create a Google account for her even though I know that she’ll laugh at me 12 years from now that she has some outdated email account. I sent a Gmail invitation to myself since I couldn’t figure out how to create an account otherwise. I found an available email and filled the whole form out with our girl’s info. There was a field for birth date that I found to be odd, but I just filled in the current date to keep going. I received an error and I thought it had something to do with another field. I tried submitting a couple of more times when I finally received the attached message (the hyperlink sends you here).

That’s when I realized it had to do with the birth date. I tried going back and using an acceptable birth date, but i was already screwed. I’ve tried a couple of times since (my original attempt was a week ago), but I get the same message. apparently I’ve made it on the Google pedophile blacklist.”

When I asked Google about whether the “Dear Sophie” ad is actually against the Google TOS, a representative explained why it was exempt as follows, “This story is about a father who opens a Gmail account and uses the web to communicate with his daughter from birth into the future. This story is not about a parent opening a Gmail account for his child to use; our system will block users identified as under 13 years of age from opening an account.”

Okay there you have it web savvy parents, as long as you open a Gmail account in order to “use the web to communicate with [your kid] from birth into the future” you’re fine. So set the age on the Gmail account to a hundred or something, capisce? 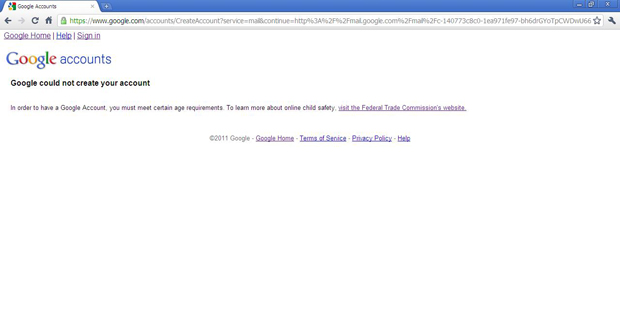