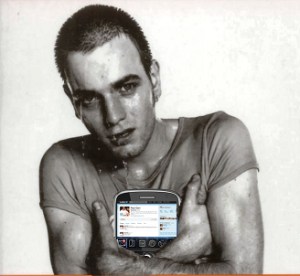 Back in August of last year, with a small amount of media fanfare, I quit Twitter and every other social network.

At the time, I was in the midst of making final edits to The Upgrade as well as writing three columns a week. For someone who makes a living writing about himself, I explained, Twitter is a huge distraction from paid work. It is also, as I discovered while researching the book, fatal to good record keeping: creating a string of disconnection, context-free updates, rather than the kind of consistent narrative you might find on a blog.

To those who suggested I simply cut back on my Twitter usage, rather than quitting cold turkey, I pointed to my struggles with drinking. The slightly-pathetic truth is, I’m cursed with an addictive personality; an all-or-nothing-mindset that has been, to paraphrase Homer Simpson, the cause of and solution to all of my problems.

Fast forward eight months and, with my book ready for release….

(whore-plug: the UK/Euro paperback is available from Amazon now, the Euro Kindle edition will follow this week – US readers can order the paperback with free global shipping here)

…and a month-long trip to Las Vegas in the offing, I was invited to write a daily diary for the Huffington Post. And, like all HuffPost authors, I was expected to provide a working Twitter account so that readers could send me their feedback, or abuse or whatever it is that HuffPost readers use Twitter to send.

I knew what would happen of course. Ordering me to rejoin Twitter for a month is like ordering me to go back to drinking for an hour. Sure another, a month later, my Vegas trip is over but my Twitter addiction is back with a vengeance: almost 1000 tweets in the past month.

As was the case in my drinking days, I’m surrounded by enablers. My publicist, Jess, is cock-a-hoop about the additional promotional channel my return to Twitter provides (a couple of well-timed tweets bounced the book into the top 50 travel writing books on Amazon UK, whatever that means). Meanwhile, my friends welcomed my return to bitching about trains, Criss Angel and whatever else half-formed thought flits through my brain; and I’m sure even my enemies are buoyed by the additional couple of dozen things a day to hate about me.

The speed with which my Twitter addiction has returned is made more remarkable by the fact that – as I wrote before – I really didn’t miss it. Again, there are parallels with my other big addiction: people frequently ask me whether I still crave alcohol, but the truth is that most of the time I don’t. When I was drinking, I couldn’t imagine getting through a stressful day – or a stress-free day, or any other kind of day – without the option of a beer. Within a week or two of quitting, though, I couldn’t understand what all the fuss had been about. I was able to have just as much fun – really – sober as I did drinking. The only difference was I could remember it the next morning.

Likewise, during my Twitter hiatus I was constantly told by friends how much I ought to miss it. “Surely it must be killing you to be off Twitter?” they’d say, as if my brain was slowly filling up with 140 character bon mots and would surely soon explode if they weren’t released. But no, had the Huffington Post diary not happened, I’d have quite happily rumbled on; my urge to share my hugely important thoughts confined to my meager output of columns, blog posts, freelance features and books.

Now that I’m back Tweeting again, though, I can’t stop. Oh, addiction.

If I could put a positive spin on my falling off the digital wagon, it would be this: it has given me a vivid reminder of why I won’t be returning to social drinking any time soon.

For all that my alcohol addiction seems like a distant memory, I know if I try to have just one drink – maybe a couple, or three – then very soon, as with Twitter, I’ll be back to two dozen or more a day, with the nights in police cells, napalmed relationships and trail of career disasters that brought.

Compared to that possibility, the resurrection of @paulcarr doesn’t seem so bad.