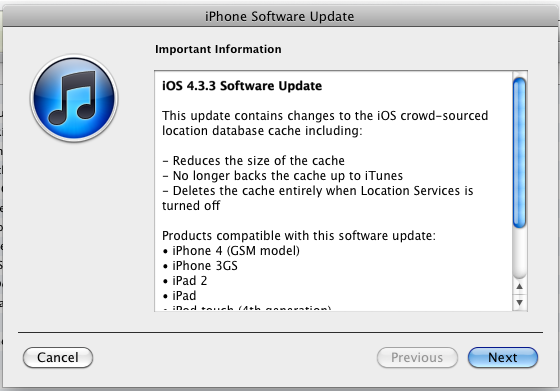 Just two weeks ago, Apple took a rare hit to their so-called “reality distortion field”. A pair of researchers found a file on the iPhone that seemingly tracked the iPhone owner’s location (based on which cell towers they were connecting to) going back as far as a year. As a few angry mobs gathered their pitchforks (and fired off lawsuits), Apple explained it as an anonymized, “crowd-sourced location database”intended for use with an upcoming traffic feature, and chalked up some of the stranger aspects (namely, how far back it tracked, and that it continued to log locations even after the user manually disabled location services) as bugs.

Whatever the reason for the log file, Apple has just released a patch (iOS 4.3.3, or 4.2.8 for Verizon iPhones) that does away with much of the creep-factor.

Here’s whats fixed, according to Apple’s changelog (bracketed notes ours):

A surprisingly hasty fix on Apple’s part, though it’d be nice to be able to disable the logging without having to disable Location Services all together. What do you think about this solution?