Way back at TechCrunch 50 2008 we saw the launch of GoPlanIt, a startup that looked to help you generate a travel itinerary in just a few clicks. The company was addressing a problem that everyone has, and while it was entering a crowded space, it looked like it had some potential. And then the market went to hell, startup funding dried up, and people stopped traveling. So founder Steve Chen (not the one who founded YouTube) and the rest of the team decided to put the company — which they’d largely funded using their own money — on the back burner.

Now GoPlanIt is back for round two, and it’s tweaking its monetization strategy to be ever-so-2011. That’s right, they’re getting into group deals. But unlike the countless deal site clones, they’re taking a slightly modified approach that might just work — they’re catering primarily to travelers.

Chen explains that most of the existing deal sites are focused on the city you live in. But there’s a big opportunity to help people save on the attractions, restaurants, tours, spas, and other things they’d do while traveling. Currently tourist-oriented businesses can have a tough time reaching customers — they have to rely on classifieds, pamphlets, and hotel concierges. Chen adds that he’s faced this problem himself as co-owner of 5A5 Steak Lounge, a popular San Francisco restaurant that draws plenty of locals but has a hard time targeting tourists. With GoPlanIt’s deals, these businesses gain another channel optimized for reaching people who are only in town for a short stay.

GoPlanIt isn’t scrapping the one-click itinerary generation that it originally launched with. Instead, these deals can be integrated as part of a suggested itinerary (you can also browse through available deals in the city you’re visiting). Each deal will offer a 35-70% discount. At this point deals are only available in San Francisco and NYC, though the company hopes to ramp this up over time. GoPlanIt isn’t sourcing all the deals itself — it’s currently working with HomeRun (which does a rev share) and is in talks with the other daily deal providers.

Chen says that the company now has a team of five and that its founders have infused more of their own capital — they’re currently looking to raise a round of outside funding.

Also see Trip Alertz, which is a ‘Group for Travel’, but focuses primarily on hotel and resort deals. 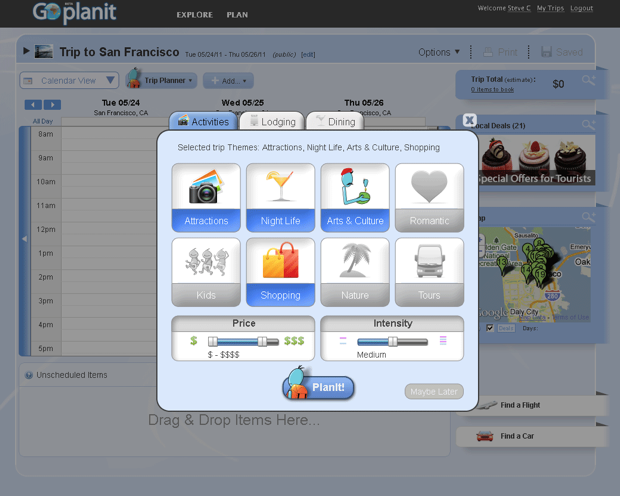 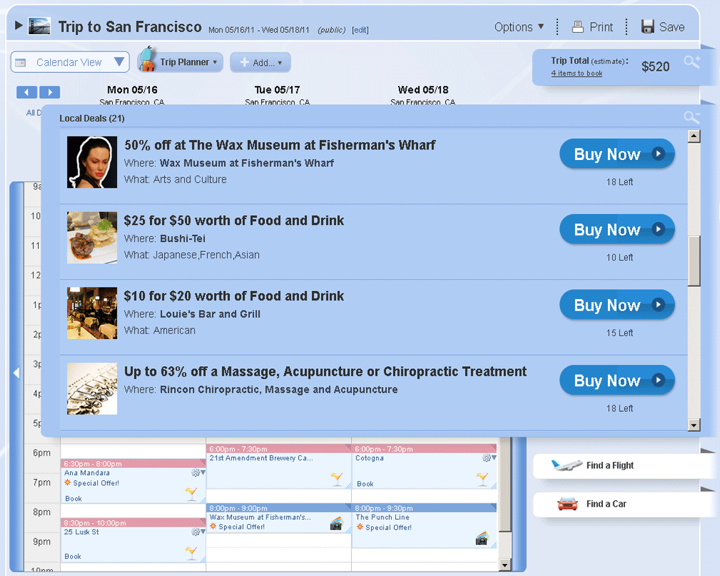