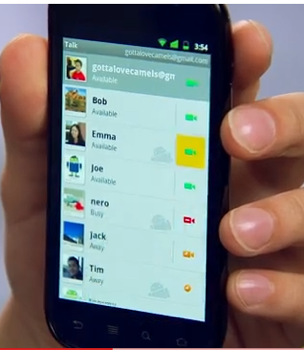 If you’re on an Android device, you may know that there are already plenty of ways to conduct video and voice calls using various third party applications (Qik, Fring, etc.). But that functionality has never been included with stock builds of Android (at least, not for phones), the way Apple’s FaceTime has been integrated into iOS for the last year. Today, that’s starting to change.

Google is currently rolling out an update to Nexus S devices that adds voice and video chat to Google Talk, which is included as part of the core set of Google applications that come pre-installed on many Android devices. The feature will work on both Wi-Fi and 3G/4G wireless networks, and allows calls between phones, tablets, and any computer with Gmail and Google Talk enabled.

The update is gradually rolling out over the air (a process that usually takes a couple of weeks), and it also includes numerous bug fixes. The Nexus One will be getting an update as well, but it won’t include the video chat support (it doesn’t have a front-facing camera, though it would have been nice to have a voice-only feature for VoIP calls).

We should note that the tablet version of Android, Honeycomb, has actually offered video chat in Google Talk since it launched, but this is the first time it’s been available on phones. Google says that the feature will roll out to more Android 2.3+ phones in the future.