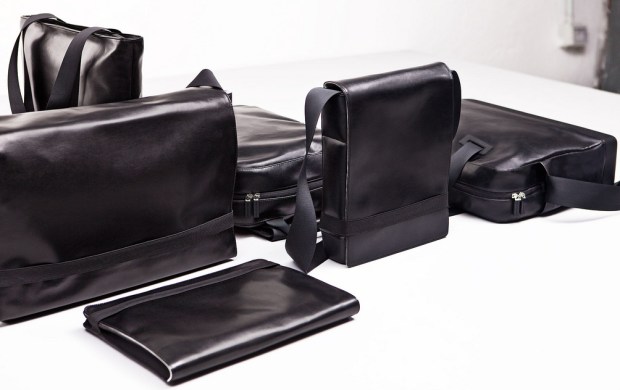 While Moleskine has been known for some time for their notebooks, they’ve been getting into other markets, from Kindle and iPad cases to special editions (Star Wars, Pac-Man) and apps. Now they’re going even further from their base and putting out a line of bags modeled after the Moleskine notebook aesthetic.

That aesthetic is, of course, an imitation of a number of ubiquitous travel-journals and sketchbooks produced in the early 20th century. And while the style lends itself well to a pocketable notebook, I’m not sure how it’ll fare as a bag. Check out the ad, though, which has some pretty slick stop-motion in it:

The slick black purse, briefcase, messenger bag, and other formats (designed by Giulio Iacchetti) are a bit “Darth” for my taste, no color relieving their relentless achromatism. The material will likely have to be felt to be judged, but it’s not leather and it’s not nylon. It’s “Coagulated polyurethane on a woven support Molded base made from padded polyurethane,” which doesn’t quite roll of the tongue — but if someone gave the chemical name for what you’re wearing right now, you probably wouldn’t recognize it either.

At least they’re maintaining that black, travel-orientated feel. A line of bags, whether I like them or not, is a fairly natural extension of the brand — as opposed to, say, putting out a netbook or a line of furniture.

More pictures of the line can be found at Moleskine’s Flickr page, and you can order them if you live in Europe. They cost about what you’d expect: $100-$175.