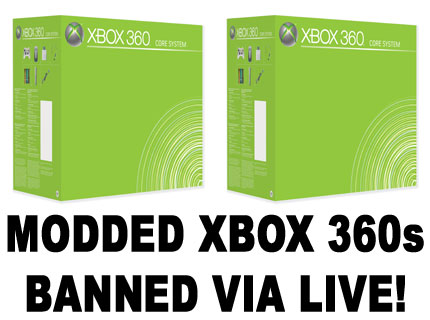 Reports are hitting everywhere that Xbox 360s previously banned for mods are now able to connect to Xbox Live. This started sometime earlier today and is either a genuinely brilliant move or simple oversight by Microsoft. Now these systems are apparently only able to sign on to the service and not participate in online play. But still, it’s something notable and gives a glimmer of hope for the millions of banned 360s cut off from the wonders of the Internet.

You may have heard that Sony is in a bit of a pickle with their online PS3 service. Something about user data being stolen and generally nastiness. Could Microsoft be looking to recapture some of the Live defectors who previously jumped ship after their modded system was hit with a ban hammer? It’s unclear right now, but this mass reprieve would instantly breath new (old) life into Live.

Update: Even before this post went live, it seems Microsoft corrected the error and rebanned all the systems. Bummer.