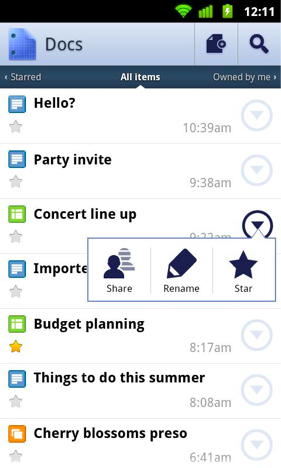 If you’re a heavy user of Google Docs and are sporting an Android device, Google has some very good news: it’s just launched a new ‘Docs’ application that gives you quicker access to your cloud-based collection of documents. You can download the free app right here.

Fire up the app and you’ll see a slick-looking interface that lets you jump to your documents, images, starred items, and collections (you can also use filters to toggle between all items in your account and just those that are ‘owned’ by you). There’s also a very nifty feature: take a snapshot of a document, and Google Docs can immediately turn it into a text document using OCR (the original photo is presented in the document as well).

The one quirky thing that I noticed is that when you go to edit a document, it looks like the native application actually loads the web-based Google Docs mobile editor that was launched in November. This means that the app requires an internet connection — you can’t edit documents where there’s no service and sync your changes later. Then again, given that one of the most compelling features of Google Docs is real-time collaboration with coworkers (which gets messy with offline syncing), this isn’t all that surprising.