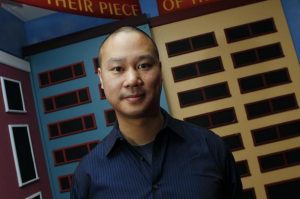 After a brief hiatus, Why Is This News? is back! In this week’s episode, Paul checks in from his Las Vegas hotel room to discuss Zappos CEO Tony Hsieh’s plans to regenerate downtown Las Vegas by moving the company’s HQ into the former City Hall.

In fact, there’s far more to Hsieh’s plan than that, as Paul explained over on the Huffington Post. In the video below, Paul waxes lyrical about Hsieh’s plans, while Sarah plays devil’s advocate, asking why Hsieh and Zappos will succeed where so many bigger companies – Google, Yahoo et al – have failed.