Looks like The New York Times has a little embargo breaking situation on their hands. (Which we love — chaos!) They’ve just put up a story with the URL: http://bits.blogs.nytimes.com/2011/04/25/latest-rival-to-groupon-livingsocial-facebook-embargo-till-midnight/ (bolding mine). That page is obviously no longer found, but it was live for a bit. And it is a big one: Facebook’s Groupon/LivingSocial “killer”.

Okay, it’s hardly a secret that the service called Facebook Deals was close to launching. In fact, the landing page has been up since March. But the NYT early story has some details.

It looks like Facebook will launch the service initially as a test in five cities: Atlanta, Austin, Dallas, San Diego, and San Francisco (which were all listed on the landing page). Not surprisingly, the service will also focus on activities that are best done with friends — things like concerts and events. The deals can spread both via email and via the all-important News Feed.

That last bit will be the key if Facebook does hope to contend with Groupon and LivingSocial. They’ll have a huge amount of leverage right off the bat to the tune of 600 million+ potential eyeballs.

The other key? Facebook Credits. NYT quotes Facebook’s director of local Emily White as saying that Deals will be the first product that uses Credits for real goods (rather than virtual ones in games).

Also mentioned are initial partnerships with OpenTable, PopSugar City, Zozi and others.

More to come, I’m sure once the chaos is sorted out.

Update 2: And NYT has put the post back up here. Another embargo bites the dust… 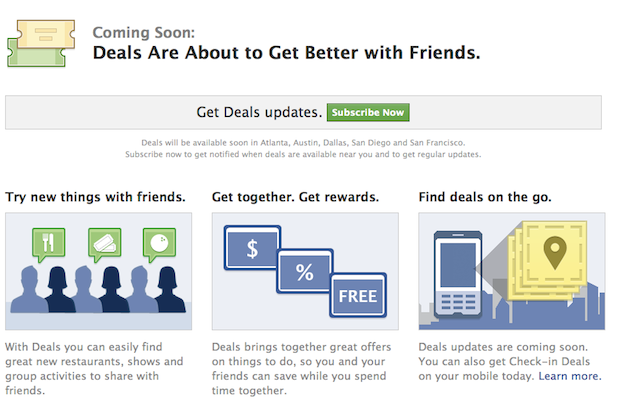