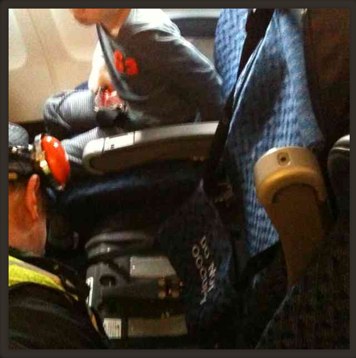 As I sit here writing this post, I am on board an American Airlines flight from Chicago to New York City. I consider it a minor miracle that the plane is actually in the air. After two cancelled flights on this trip alone, a seat without a cushion, and some trouble counting the number of people on the plane which made us return to the gate a second time after another minor problem, I’ve lost count of how many errors American Airlines has now made in this comedy that is my travels. Oh, and @AmericanAir also managed to prove that it is an utterly toothless marketing arm of American which fails when it comes to providing actual customer service. I never thought I’d say this as a loyal American Airlines customer who has travelled hundreds of thousands of miles on American over the years, but it may now be worse than Delta.

Yes, this is going to be a rant. If that’s not your thing, avert your eyes. There isn’t any one thing I can point to that makes me never want to fly American again. Rather, it is everything—a succession of flubs and foibles. I like to believe I am a pretty tolerant air traveler, but everyone has a breaking point.

First, a little context. My tale of travel woe begins last Tuesday on a trip to Chicago with my family, which was cancelled due to severe weather. American rebooked us on a flight with a stopover in Minneapolis, but the storms persisted and we were held there for a few hours. By the time we finally landed in Chicago, what should have been less than a three hour direct flight, turned into an 11-hour journey with three small children in tow. But I don’t blame American for that. The airlines can’t control the weather.

At least the weather was cooperating yesterday, when we were scheduled to fly back. Except our flight was cancelled once again. This time it was because the crew—the one that was supposed to fly the plane—was not available. They were either over-scheduled or someone got lost along the way, I don’t know. But American didn’t have enough crew members to fly the plane.

Okay, I told the agent, book me on another flight. All the flights that day were sold out. How about a connecting flight? Sold out. How about on another airline? Sold out. Grrr. It is a holiday weekend, after all, and I needed to get five seats on a new flight. The agent suggested that I take a 6 AM flight the next day. If it was just me, I’d take it. But getting three sleepy kids to the airport that early in the morning was going to be tough. Anything later? The only other flight available was a 6:55 AM flight.

My flight was cancelled and I was pushed to the next day. Never once was I offered a hotel stay, a flight voucher or an upgrade. At this point, I started Tweeting out my frustrations:

I just needed to vent. But then @AmericanAIr, American’s official Twitter account, gives me hope with this response:

But they didn’t actually do anything about getting me a better flight. They just didn’t want me bad-mouthing them on Twitter (maybe it had something to do with my 31,000 followers). Virgin America got in on the social media PR fun by Tweeting:

Too bad they don’t fly to New York from Chicago. Meanwhile, @AmericanAir got back to me and referred me to the 800-number for AA reservations. Thanks, I already tried them. Not that I should get any special treatment, but don’t offer to help if you can’t intervene on behalf of customers. To me, this really points to where social media marketing fails. It is nothing more than PR unless they can provide actual customer service.

Anyway, the worst was yet to come. We rally the kids in the morning, drag my brother-in-law out of bed and make him drive us to the airport. We get there on time, check our bags, get through security. All is good and light in the world. Then we get on the plane.

One of the crew members looks at my ticket and warns me that my seat cushion is missing. They are getting another one, though, don’t worry. I don’t even want to know what happened to the old cushion that they had to remove it. The plane fills up, and still no cushion. I’m standing in the aisle in everybody’s way. An enterprising stewardess grabs another cushion from one of the few remaining open seats and places it on my seat. Great, problem solved.

Not so fast. An airline maintenance worker comes aboard and informs us that you can’t just move a cushion from one seat to another. They look the same to me and the stewardess. No matter. We put it back where it was. Does the maintenance worker have another cushion with him? No, instead he proceeds to place a “Do Not Occupy” sign on the cushion-less seat. Yeah, I wasn’t going to sit there anyway. A lady switches seats with my son so that we can sit together.

Now we are off to the runway. Uh-oh. We have to turn back because “maintenance needs to check something in the cockpit.” We taxi back, they check out the issue, and we are given the green light. Back to the runway we go. We’ve been sitting in the plane for three hours now. And, oops, we have to go back to the gate once again because of a discrepancy between the number of people on the plane and the headcount at the gate. That’s right, American Airlines doesn’t even know how to count.

Here’s the kicker, when we get back to the gate, they let us off to stretch our legs. Nobody asks for boarding passes when we return. Anybody in the gate area could have walked on that plane. So much for security measures (the stated reason why we had to go back to the gate in the first place).

Well, the plane took off eventually. And at least the WiFi works. You’ve still got that going for you, @AmericanAir.

Update 4/29: A few days after this story ran, a customer service rep from American Airlines contacted me to apologize for my experience and offered me a $1,000 voucher. I accepted both the apology and the voucher.