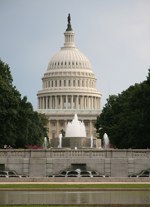 Policy areas of focus for Facebook this year include global regulation of software companies and restrictions on internet access by foreign governments; online safety measures, internet privacy regulations, cyber security, and FCC regulations on net neutrality. A new issue that the company spent lobbying resources on is discussing House, Senate, and Government rules to allow more Government and Congressional offices to access social media to engage with citizens.

Other new additions to Facebook’s lobbying efforts include patent reform and lobbying for Oregon power and water needs to support high-tech growth and investment in Oregon. Facebook just opened a new, energy-efficient data center in Oregon.

It’s not surprising that the company is building out its presence in D.C. That’s something that both Google, Microsoft and others have been doing for some time now.

In fact, Google also spent record dollars on lobbying efforts this past quarter, shelling out $1.48 million. That’s compared to the search giant’s Q1 spend in 2010, which came in at $1.38 million. Google spent a total of $5.2 million in lobbying last year.