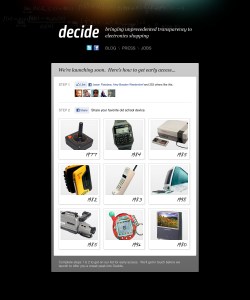 Stealth startup Decide announced this morning that it has closed a $6 million series B round of funding. The series B round was led by Maveron, Madrona Venture Group, Google founding board member Ram Shriram, and former Expedia CEO Erik Blachford. Maveron’s Dan Levitan and former Farecast CEO Hugh Crean will be joining Decide’s board of directors.

Decide adds to the $2.5 million in series A it raised last summer, bringing total investment to $8.5 million. Decide will use its series B to continue putting the finishing touches on its shopping service and website, which it plans to launch next month, as well as ramp up hiring efforts.

The Seattle-based startup is being tight-lipped about the particulars of its service, so at this point we don’t know much beyond what Decide CEO Mike Fridgen said in a January blog post — that the company is “building a revolutionary new shopping service that will bring unprecedented levels of transparency to electronics shopping”.

However, we do know that Decide was founded by Oren Etzioni, the founder of Farecast, an airfare predictions service, Metacrawler, a metasearch engine, and Netbot, one of the Web’s first comparison-shopping services. The company also appears to be a re-start of PriceYeti (which allows anyone to track any item on the web and get an email instantly when the price drops) and Eggsprout (which compiled data on resumes), as several founding developers from both companies have joined Decide’s team and are transferring some of the high-level concepts to the shopping service.

So, we can be sure that Decide is likely to be developing complex data mining and comparison models to give the consumer electronic space an innovative new look. Leveraging an impressive team with veteran experience in uncovering consumer insights, and $8.5 million in the bank, there’s no doubt that Decide is a startup worth watching.

I’m also curious as to how much of Decide’s $8.5 million was spent purchasing the “Decide.com” domain name. My guess is that it wasn’t cheap. We’ll just have to hope it was worth it. Stay tuned for more.