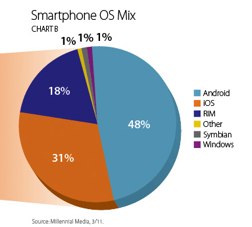 Millennial Media’s monthly mobile report is out today, giving us a view into how each OS and manufacturer is performing on the mobile ad network. Millennial, whose ads reach 90.3 million users monthly in the U.S.; is the third largest network behind Google AdMob and Apple’s iAd, so data shared on Millennial’s network is certainly indicative of the state of mobile advertising. For the fourth month in a row, Android led in terms of the largest impression for Smartphone OS, with 48 percent of impressions on the network. But it’s important to note that Android’s share has consistently fallen over the past two months on the network. 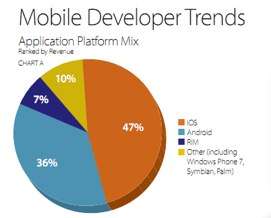