A couple days ago, the headlines blared that Bing now has 30 percent search market share in the U.S. Not so fast. Those numbers were based on Hitwise estimates. Today, comScore came out with its own qsearch estimates, which is what Wall Street analysts following Google report. The comScore numbers tell a slightly different story.

If you include all searches, then the combined market share of Bing (13.3 percent) and Yahoo (17.7 percent), which is powered by Bing, is indeed 31 percent. But this “core” search number includes Google slideshows, contextual search in places like Yahoo News, and Google Instant. Every time you go through a slideshow on Yahoo, for instance, related search results appear below, inflating its numbers.

But ComScore strips out those numbers to come up with what it calls “explicit search” (you know, when someone actually types a query into a search box). When you look at explicit search, Bing and Yahoo combined only had 29.5 percent market share in the first quarter of 2011, which is up from 28.0 percent in the fourth quarter of 2010. So Bing is making gains at the expense of Google, whose explicit search share in the first quarter was 65.6 percent, down from 66.4 percent in the fourth quarter, or almost a full point. But it hasn’t quite reached 30 percent yet.

Bing also keeps taking share from Yahoo, which ends up being a wash. Over the past nine months, Bing has gained nearly 3 percentage points in explicit search share, but half of that has come from Yahoo.

The table below is courtesy of Citi analyst Mark Mahaney: 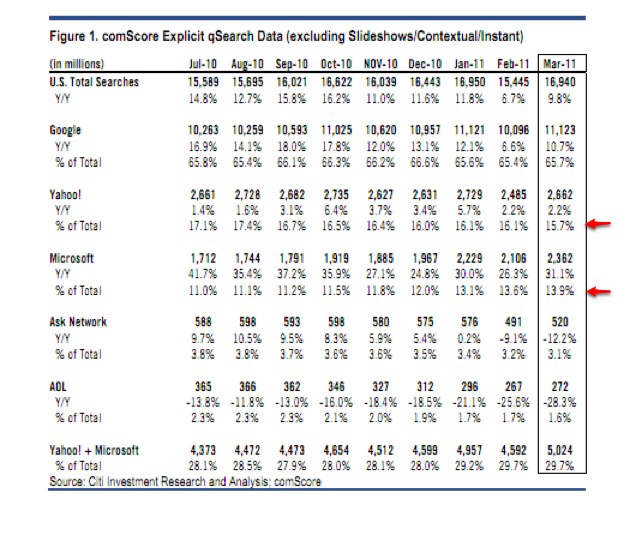