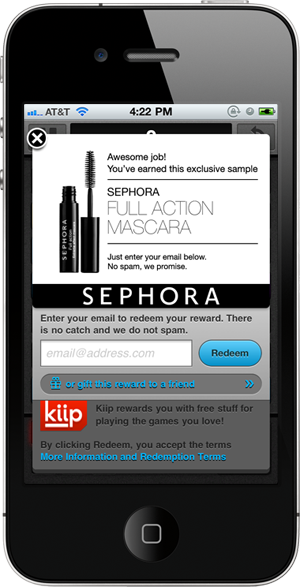 Kiip, the seven month-old mobile ads startup, is finally coming out of stealth today and revealing an entirely new model for in-game advertising, one that offers users value instead of fighting an uphill battle for their attention.

Going beyond the banner and text ads used by industry leaders iAd and AdMob, the team behind Kiip has thought long and hard about the way people actually play games and has come to conclusion that the moments when players experience in-game achievements like upping a level, completing a challenge or accumulating a certain number of points are the most valuable in terms of providing the most user engagement.

Unlike Tap.me, Kiip doesn’t just show an ad when those moments are achieved. What it does instead is pretty interesting: Kiip has partnered up with big brands like Sephora, popchips, Homerun.com, Sony Dash, Vitamin Water, 1-800-Flowers, Dr Pepper, GNC, Carl’s Jr and Hardee’s to offer players actual in-game rewards like a voucher for six bags of popchips, a lipstick sample or a complimentary smoothie when they complete gaming milestones.

“Achievements are the universal currency for accomplishment and every game in the world has achievments,” 19-year-old Kiip co-founder Brian Wong tells me, explaining what he calls the “Achievement Moment.” “The achievement itself isn’t the cool thing, it’s the moment. We realized that the moment was worth something. The natural evolution is to put something there that actually matches the achievement.”

Wong emphasizes that Kiip (pronounced Keep) isn’t a conventional ads network but a “Rewards Network”. Hmmm … It depends on what you consider an ad. Offering players custom-tailored rewards is basically lead generation. It’s an easy away for advertisers to associate their brand with a positive moment, almost diabolical in its simplicity; “Driving for customer acquisition when players are happy.”

As of midnight tonight the Kiip Rewards Network will be rolling out rewards in over 15 games, reaching 12 million monthly active users (Wong wouldn’t tell me which games they were involved with so if anyone sees a Kiip ad please let me know).  Brands will pay up when a user signs up for a reward, from 25 cents to $3 per cost per engagement.

The rewards themselves are actually targeted algorithmically based on the game demographics, for example if no girls play a game there will be no offers for lipstick. If someone ends up with something they don’t want they can always gift it.

Kiip is also complimentary to other mobile ad networks as it only provides rewards for achievements and doesn’t get into banner ads or the real estate business. Says Wong, “People have been too focused on real estate and pieces of the screen being part of the advertising equation, but they’ve completely overlooked the notion of moments, moments where you’re happy, moments when you engage. These moments are worth something.”

Co-founded by former Digg employees Wong, Courtney Guertin and Sequence’s Amadeus Demarzi, Kiip pocketed $4 million in Series A funding from Hummer Winblad and True Ventures just last week. Wong tells me the team has got a lot more up its sleeve, and as always, you’ll read about it first here. 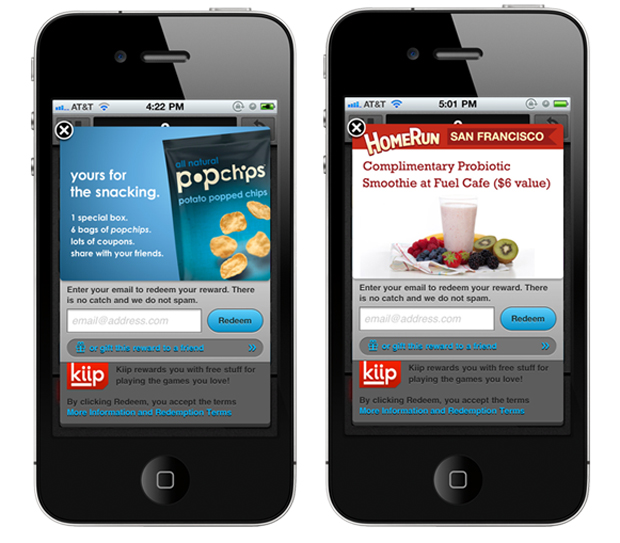