When Christopher Poole (aka Moot) started 4chan, it was a very basic image board that attracted an incredibly active and vibrant community. But 4chan itself is not a pretty site. It is almost Craisglist-like in its barrenness. That is why Poole is re-imagining the image board with his latest startup, Canvas, which just launched in private beta a couple months ago. Demand to get in is so high, that he’s had to throttle back the number of people he is letting in even on a private basis.

In the Founder Stories video above, which is Part II of this interview, Poole explains how Canvas works and how his goal is to make it much easier for anyone to manipulate and share images. You can already see how much better it looks. 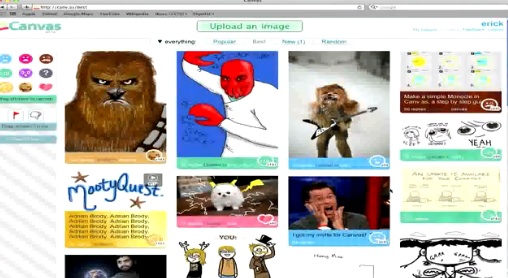 The video includes a few live screenshots, and here are some open threads anyone can check out. One of the breakout features in Canvas is remixing images. The image editor on the site lets users do simple photo and image editing in the browser, which is awesome for meme propagation. Be sure to also watch Part I of this episode, in which Poole talks about the origin of 4Chan and the evolution of memes.

In the video below, Poole and host Chris Dixon talk about the importance of social grooming and setting the tone early in social communities like 4chan, Canvas, and Flickr. (Disclosure: Host Chris Dixon is also an investor in Canvas through Founder Collective). One reason Poole isn’t letting everyone in at once to Canvas is because he wants the a small, core group to define the norms and early usage patterns of the site. The way to deal with garbage or offensive material is to either bury it, do more to surface the best stuff, or allow the community to sort itself self-defined sub-groups, which is what Canvas does.