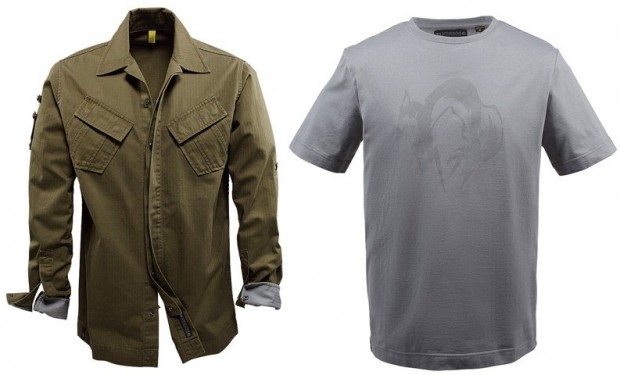 Now, you could of course always get promotional shirts and stuff with Solid Snake (or whoever he is) on them — I vaguely remember something like that for the original NES game. But now, my friend, now you can get Metal Gear inspired clothing. Like, clothing the guys in the games might have worn. This just saved me a lot of work on my “Metal Gear Throwaway Enemy” cosplay project.

I’m not really loving the shirt with the diagonal pockets, but the raincoat looks all right (if you’re into that) and the grey FOXHOUND shirt is actually pretty understated and attractive. The good part is most people would probably just think it’s for some obscure band or something. Only the truly nerdy will know how much of a nerd you are. That’s the best kind of nerdy clothing (I have a great N.E.R.V. shirt that fills this role).

All this gear is actually based on only the Peace Walker game, which I haven’t played, but I supposed if it takes off they’ll expand to other games. Probably not Snake Eater, though, we all know where to get camo if we need it.

Check out the line over at Silicon Era. It’ll be available online starting April 11th – no word on pricing or whether it’ll be out here in the states. My guess? You’ll have to import.