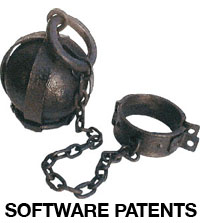 Imagine, for a second, that a patent is granted for the following:

Think about how many companies that would impact. Pretty much everyone with an App Store, or, hell, pretty much anyone with any sort of retail sales application, right? Yep!

Turns out, that patent exists — and the company that owns it is looking to sue juuuust about everyone.

The patent in question was granted back in 2009, to a company called HW Technology. Now they’re taking on Apple and their App Store, Google and their Android Market, and RIM and their BlackBerry App World. Oh, and HTC, LG, and Nokia. Oh! And Amazon, eBay, Hotels.com, Buy.com, and Priceline, and 21 other entities.

The lawsuit, filed earlier this week, primarily targets anything that “allows users to complete a merchant transaction without the need to generate a voice call.”

Anyone who says there’s nothing wrong with software patents at this point is certifiably insane. Please, please let this one get thrown out quick.