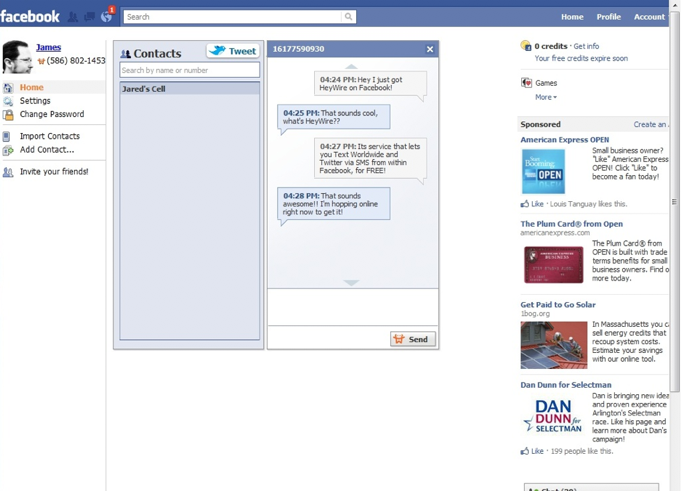 HeyWire, a service developed by MediaFriends that offers a free SMS service is debuting its Facebook App that will allow Facebook users to send both texts and Tweets via SMS (from a real phone number) from within Facebook.

Via the new HeyWire Facebook App, Facebook users can text worldwide without any per messaging fees and Tweet via SMS from within Facebook. Here’s how it works. Similar to other free texting apps, HeyWire users are given a real phone number to send and receive unlimited texts with friends and family worldwide.

Users can send messages via the HeyWire Facebook App or the HeyWire apps for iOS and Android devices. Texting conversations actually follow users from the HeyWire Facebook App to their smartphone apps, which is useful. Of course, this comes with a price. HeyWire is charging users 20 Facebook Credits (around $2.00) per month, for a U.S. phone number with unlimited texting from within Facebook to any mobile phone in the USA, Canada and Mexico, and to most mobile phones in China, the Caribbean and Central and South America.

Honestly, if I’m on Facebook, I’m probably just going to message my friends as opposed to using a text message, so I’m dubious as to the large-scale value of the new app. And if I do use Facebook’s messaging system, I can continue those messages on an iPhone or Android phone via Facebook’s app or the mobile web.