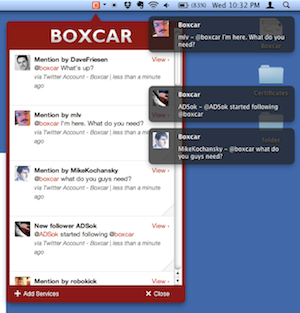 My love of Boxcar should be pretty clear at this point. Because I’m an information junkie, it’s probably the app I use the most on my iPhone/iPad besides Safari. And earlier this year, they brought the notification goodness to the web as well. Now they’re taking the next step: native Mac support.

Yes, Boxcar is here for the Mac. The app resides in your toolbar and when clicked shows a drop-down with all of your notifications as they come in in realtime. You can set it so a sound goes off with every new message and if you have Growl installed you can get a visual notification as well.

He also notes that even though notifications are not as vital on a traditional computer with more robust multi-tasking capabilities, people have been using the Mac version to get away from things like a full-fledged Twitter client which can distract you. Instead, Boxcar only notifies you when they must: when you have an @reply or DM, for example.

One interesting thing about Boxcar for Mac is that they’re not releasing it via the Mac App Store. George says they want to use this initial release as a large-scale beta of sorts, and Apple’s requirements for their store make some of what they want to do difficult. Instead, a release through that store will likely come down the road.

So for now, you can find Boxcar for Mac on their website here.